Chennai Super Kings will be a better side in the games to come: Stephen Fleming 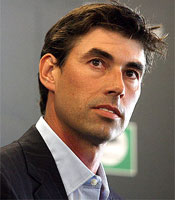 The Chennai team got of to a shocking start in this edition of the Indian Premier League as they lost to Mumbai Indians by 8 wickets. Known to use their home advantage effectively, this loss was a lot to learn for the defending champions said team coach Stephen Fleming. The coach of the side said that CSK would be a better side in the games to come as they have the right players in their side. (Content Source : network1media)