A stunning second wicket stand between Skipper Graeme Smith and Hashim Amla has more or less taken the Perth Test match away from the Aussies. The experienced duo demoralized the new look Australia completely to take the visitors to an overall lead of 292 with still 8 wickets in hand.

A stunning second wicket stand between Skipper Graeme Smith and Hashim Amla has more or less taken the Perth Test match away from the Aussies. The experienced duo demoralized the new look Australia completely to take the visitors to an overall lead of 292 with still 8 wickets in hand. Hashim Amla was the aggressor for a change and the bearded batsman just missed out in smashing his way to a century in a session. Graeme Smith missed out with three figures but he did his role in pounding the Australian bowling. 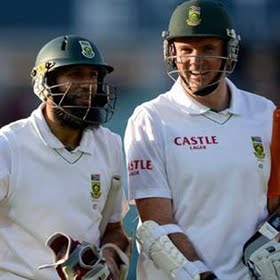 There was early joy for the hosts in the final session when Alviro Petersen (23) was brilliantly caught and bowled by Mitchell Johnson after getting a leading edge in an attempted nudge to the onside to a short and rising delivery. Amla joined Smith in the 8th over and turned the heat on the Aussies. The pitch seemed to have flattened out under the sun and there was little margin of error for the bowlers. The South Africa duo added 178 runs in just 25.3 overs before Graeme Smith was amazingly caught by Nathan Lyon who covered lots of ground before lunging forward to catch the top edged pull off Mitchell Starc. Smith fell for 84 (from 100 balls with 13 fours) with SA strongly placed at 206 for 2 in just 32.3 overs.

By the close of play, Jacques Kallis (17*) also hit some lovely shots while Hashim Amla finished on 99* (from 84 balls with 10 fours). Only a miracle can save the Aussies from losing this Test match because of this one nightmarish session. Mitchell Starc was taken for 76 runs in 10 overs and debutant Hastings went for 47 runs in his 8 overs.

Tea Report: South Africa secured a first innings lead of 62 runs after bowling out Australia for 163 runs. By Lunch, the Proteas stretched it further to 86 runs with all its 10 wickets in hand.

The afternoon session saw Robin Petersen taking the last three Aussie wickets. He cleaned up Matthew Wade (68 from 102 balls with 7 fours and 3 sixes) and Mitchell Johnson (7) who missed their slog sweeps off the left-arm spinner. Last man to be dismissed was John Hastings who contributed a handy 32 before he was caught by Alviro Petersen at long off who stepped out and stepped in to convert a possible six into a catch.

Australia were dismissed for 163 in 53.1 overs. South Africa closed the post lunch session at 24 for no loss in 6 overs.

Lunch Report: South Africa are on the charge taking five wickets this morning session at the WACA to have Australia on the mat in the deciding Test match. At Lunch, the Aussies are in a deep hole at 118 for 7 in 36 overs with Dale Steyn ripping them apart in an action packed morning session. The Aussies are trailing behind by 107 runs.

It was just in the second over of the morning that Dale Steyn captured two wickets that of David Warner (13, caught behind in an ambitious square drive on the up) and night watchman Nathan Lyon (7, squared up on the backfoot and caught in the slips). Ricky Ponting (4) couldn’t produce any heroics atleast in the first innings of what is his farewell Test after being lbw to a skiddy inswinger from Vernon Philander which left Australia at 43 for 5 in the 16th over.

Skipper Michael Clarke (5) who has been in a dream form got an unplayable outswinger from Steyn which was angled in towards middle and swung away late at pace to force an outside edge to the keeper. At 6 for 45, Australia were doomed almost but the left-handed pair of Michael Hussey and Wicket Keeper Matthew Wade took them past the three figure mark. Morne Morkel provided the crucial breakthrough by having Michael Hussey (12) edge him into the slips to break a 55-run partnership.

By Lunch, Matthew Wade has come up with a fighting knock of 60 (from just 69 balls with 7 fours and 3 sixes) and as a result the deficit for Australia to clear is not that huge.