Going into day four of the Newlands Test at Cape Town, the Test between South Africa and Pakistan was evenly poised. The visitors in fact had done well very to stay in the game, first by putting up a competitive first innings total, and then not allowing the Proteas to run away to a huge total when it was their turn to bat.

Going into day four of the Newlands Test at Cape Town, the Test between South Africa and Pakistan was evenly poised. The visitors in fact had done well very to stay in the game, first by putting up a competitive first innings total, and then not allowing the Proteas to run away to a huge total when it was their turn to bat. Pakistan were looking good in their second innings as well, and were set to post a challenging total in front of the hosts when they collapsed, in Pakistan’s case, rather explicably.

Until their failure in the second innings, Pakistan and South Africa were fighting tooth and nailin the contest. Skipper Misbah-ul-Haq’s dismissal on day four however turned the tide South Africa’s way completely. Following his dismissal, the visitors needed the well-set Azhar Ali to carry on and play a big innings. But, once he fell to Vernon Philander, the Pakistan innings came to a close rather quickly. While the Pakistan batsmen had no answer to the pace challenge put up by Philander and Dale Steyn, there were surprisingly uncomfortable against the spin of Robin Peterson as well. 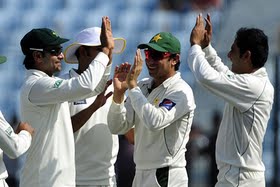 Speaking of Peterson, the match saw some amazing individual performances from either side, but it was the Proteas all-rounder who made the key difference, and was rightly adjudged the man of the match. Chasing Pakistan’s competitive first innings total, South Africa were in trouble of falling behind courtesy some excellent bowling from Saeed Ajmal. Had Peterson not intervened, the hosts might well have collapsed to a below-par score. Peterson’s best Test knock was crucial in the sense that it reduced the first innings difference between the two sides to mere 12 runs and, as a result, effectively made the match a second innings clash.

Had Pakistan got rid of Peterson early, they could have reduced South Africa to under 250, which might have had a major impact on the Test. With the ball as well, Peterson made a substantialmark. It was he who broke the Misbah-Azhar alliance in Pakistan’s second dig, which sparked the visitors’ batting collapse, and changed the complexion of the game. Peterson has been around the South African side for a few years now, but has never managed to establish himself. The match-winning effort at Cape Town could be just what Peterson needed to resurrect his international career.

While Pakistan faltered yet again, their performance was much better in this Test. Younis Khan and Asad Shafiq made dogged centuries in the first innings to rescue Pakistan from a tight situation. With the ball, Saeed Ajmal was excellent, and picked up the first six Proteas wickets to put his team on top. He was highly effective in South Africa’s second innings as well, but the fact was that the bowling side just did not have enough runs to defend. For South Africa, AB de Villiers’ half-century in the first innings and Amla’s in the second were significant. Pakistan had their chances in the Test, but South Africa fought back every time, exactly like the number one Test team is expected to.