Born on today, June 2nd are the Australian greats Steve Waugh and Mark Waugh who delighted cricket fans mostly during the 1990s. Steve Waugh and Mark Waugh are twin brothers. Mark Waugh is the younger of the two born four minutes after Steve. These twin brothers have gone onto become world class players. Their other brother, Dean Waugh, four years younger than them was also into cricket but had played just the one first class game.

The Waugh twins were born in 1965 in Canterbury, New South Wales. They became the first twins in Men’s International Cricket to play together in a Test Match which happened in 1991. Steve Waugh made his International Debut much earlier than that in 1985 in a Test Match against India. His ODI Debut was in 1986 against New Zealand. Steve Waugh began as a middle order batsman who could bowl more than useful medium pace. Waugh is known for his resilience as a batsman. Although, Steve Waugh did not have the greatest of techniques, especially against short pitch deliveries, he used to survive somehow taking quite a few body blows but never ever was going to throw his wicket away. 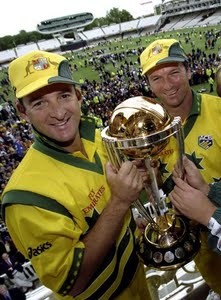 Steve Waugh might have looked ugly at the crease against the quick bowlers but his determination to fight it out and do so for long periods of time was immense. At one stage, Steve was considered as the best Test batsman in the World! Steve Waugh was a clever medium pacer who could swinng and reverse swing the ball beautifully and also mix it up with variety of slower ones. He had to reduce his bowling workload though because of back problems.

Mark Waugh on the other hand made his International Debut in 1988 through an ODI against Pakistan. His Test Debut came only in 1991 against England. Mark Waugh was surely more talented and versatile with the bat than his twin brother Steve. At one stage during the mid 90s, Mark Waugh was considered as the World’s Best Batsman along with the likes of Sachin Tendulkar and Brian Lara. This was especially in the ODIs when Mark Waugh was sensational with his opening partner Adam Gilchrist.