Former Pakistan spinner Saeed Ajmal has announced his retirement from all forms of cricket on Monday.

Former Pakistan spinner Saeed Ajmal has announced his retirement from all forms of cricket on Monday. Ajmal had a short and successful but controversial career, which was over after his action was questioned.

Ajmal's most famous moment came when he took 24 wickets in three Tests against England in 2012. After being banned for chucking, he remodelled his action and returned in 2015, but failed to make any impact. 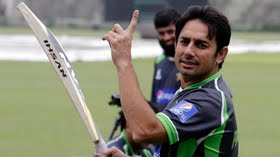 "I am quitting all forms of cricket after the current National Twenty20 tournament," Ajmal told AFP. He added, "It was a highly satisfying career in which I achieved whatever goals I set for myself and helped the team win matches."