RCB Vs MI: Pressure of chasing huge total got to Bangalore

In the preview to the big clash between Mumbai Indians (MI) against Royal Challengers Bangalore (RCB), all the talk was about whether Chris Gayle would weave his magic again. And why not?

In the preview to the big clash between Mumbai Indians (MI) against Royal Challengers Bangalore (RCB), all the talk was about whether Chris Gayle would weave his magic again. And why not? For the third season in a row, he has been sensational form. If anything, he has been even better this year, than in the last two editions. His mesmerising, record-breaking knock in the last match was enough to arrive at this conclusion. But, Gayle’s genius has also had its flip side as far as RCB are concerned. They have been overly dependent on him. To be fairer to the side, Gayle’s magnificence hasn’t given the other batsmen much chance to spend time at the crease. This was one of the reasons for their downfall against Mumbai at the Wankhede.

Agreed, Mumbai had put up a massive total on board batting first. At the same time, it must be mentioned that, had Gayle fired, he would have made a mockery of the chase. The fact that he didn’t, made the task doubly difficult for the visitors, and the others just couldn’t withstand the pressure. In a sense, the story of the chase was all about whether or not Gayle would come up with another special innings. That Harbhajan Singh celebrated in ‘Gangnam Style’ after getting rid of the West Indian left-hander was a clear sign that even Mumbai felt their job was more than half done following Gayle’s dismissal. 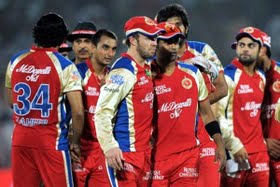 While it must be said that poor bowling was the chief cause of RCB’s loss on Saturday, their capitulation with the bat was worrying nonetheless. On the rarest of rare occasion when Gayle couldn’t come up with the good, all the other batsmen faltered inexplicably. It isn’t that they don’t have any other exceptional talent bar Gayle. Tillakaratne Dilshan, AB de Villiers and Virat Kohli are three pillars of the RCB batting, but they couldn’t make a significant contribution, which hurt RCB in a big way on a day when there was no Gayle storm.

Moving away from the Gayle mania, one must give credit to the Mumbai batsmen for seizing the opportunity and put the table toppers under extreme pressure right from the start of the match. Batting first, Dwayne Smith once again got the side off to a flying start. For the second game in a row, he was the team’s best batsman, which means skipper Ricky Ponting’s tactics of voluntarily dropping himself has worked wonders. Like in the last game, Smith constructed a substantial innings to lay a solid foundation.

Smith apart, the other batsmen also chipped in crucial contributions to take Mumbai towards a healthy total. Sachin Tendulkar only lasted a few balls, but while he was there he ensured he enthralled the crowd with some smashing hits. Dinesh Karthik came up with another quickfire innings to push Mumbai further after Smith fell. With the stage set, Kieron Pollard was at his smashing best, and Harbhajan Singh chipped in with another invaluable cameo.

Turning point of the game: With so much hinging on Gayle during the chase, his wicket, without any doubt, was the key.