Virat, Waqar back Tendulkar’s views on two balls in ODIs

Former India captain Virat Kohli and Pakistan legend Waqar Younis have backed Sachin Tendulkar’s views that two balls in ODIS are a disaster for the bowlers and the format.

After England aging thrashed Australia on Thursday, Tendulkar took to Twitter and opined, Having 2 new balls in one day cricket is a perfect recipe for disaster as each ball is not given the time to get old enough to reverse. We haven’t seen reverse swing, an integral part of the death overs, for a long time. #ENGvsAUS. 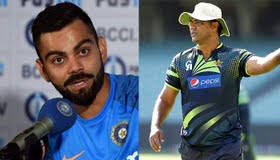 Virat Kohli too was asked the same question during the press conference before India's departure to Ireland and England. He stated, "I've read a lot of things about two new balls and I agree it's brutal for the bowlers. There's hardly any room for attacking cricket left from a bowler's point of view if you do not provide pitches that assist them with the new ball.”

As for Waqar, her tweeted, Reason why we don’t produce many attacking fast bowlers..They all very defensive in their approach...always looking for change ups..totally agree with you @sachin_rt reverse swing is almost vanished.. #SAD