SH Vs PW: Perera’s all-round showing did the trick for Sunrisers

A target of 127 in a 20 over game should be a cakewalk for any team, but Sunrisers Hyderabad managed to successfully defend the target thanks to a cunning bowling performance, which left the Pune Warriors stunned, at the Rajiv Gandhi International Stadium, Hyderabad.

A target of 127 in a 20 over game should be a cakewalk for any team, but Sunrisers Hyderabad managed to successfully defend the target thanks to a cunning bowling performance, which left the Pune Warriors stunned, at the Rajiv Gandhi International Stadium, Hyderabad. To pull off an unlikely win, Sunrisers needed a complete team effort from their bowlers, which exactly what they came up with. Thisara Perera, Dale Steyn and Amit Mishra combined beautifully to never allow Pune a sniff in the game in spite of the small score they were chasing.

Even though Mishra was declared the man of the match for his three-wicket haul, it was the Perera who was the standout performer. When Sunrisers were struggling with the bat, Perera came in and blasted the ball around to give the floundering innings some hope. Although his 18-ball 30, which was studded with three fours and a six, did not lead Sunrisers to a competitive score, it did give them something to bowl at, and they utilised the little window of opportunity to the hilt. After playing a handy knock with the bat, Perera made a significant contribution with a ball as well. 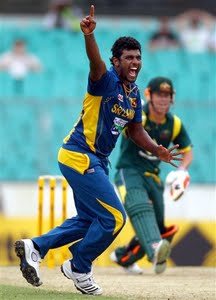 It was Perera, who got the early breakthroughs for Sunrisers, getting rid of the well-set Robin Uthappa as well as the extremely dangerous Marlon Samuels. Later in the night, Perera also chipped in with the run out of Mitchell Marsh, but by then the match was pretty much in the home side’s grasp. As the result of the quick wickets at the start, Pune were on the back foot very early on and thanks to some tight bowling from Sunrisers, could never recover from the poor start even though they were chasing a rather small target for victory.

Leggie Mishra’s bowling effort was crucial in the sense that it did not allow Pune to breathe easy at any stage. The wickets that Mishra picked up were also big ones. Yuvraj Singh, as everyone knows, has the ability to change the complexion of any match, but fell to the guile of Mishra on the day. Manish Pandey and Abhishek Nayar were capable of threatening Sunrisers’ fight back with the ball, but Mishra saw to it that nothing of that sort happened, sending both of them back to the pavilion with some very smart bowling.

Not least of all, Dale Steyn was brilliant at the beginning as well as towards the end, when he cleaned up the tail in a matter of five balls. Even though the fast bowler did not get any wickets at the start, he troubled the batsmen with his nagging accuracy and pace, and it was one of the reasons, Perera struck from the other end. Intentional of unintentional, it worked out to be a perfect game plan for Sunrisers in their debut match. Pune’s bowlers would have felt let down by their batsmen, but all credit to Sunrisers for the manner in which they powered their way to victory.

Turning point of the game: Abhishek Nayar’s dismissal in the 16th over. With five overs to go, Pune were still in with a chance, needing 49 from 30 balls. But Nayar fell for 19 off 14 balls, and though Ross Taylor was at the crease, he had too much to do.