There was some consolation for India following the disappointing result in the Test series as they won the first T20 at Pune by a five-wicket margin. It wasn’t as comprehensive a win as the final scoreboard suggested, but India would take the victory nonetheless, for they were in desperate need to break the monotony of losses in recent times.

There was some consolation for India following the disappointing result in the Test series as they won the first T20 at Pune by a five-wicket margin. It wasn’t as comprehensive a win as the final scoreboard suggested, but India would take the victory nonetheless, for they were in desperate need to break the monotony of losses in recent times. The result was the culmination of a solid all-round effort from Yuvraj Singh, and good supporting roles played by Ashok Dinda with the ball and Dhoni, Raina and Kohli with the bat, during the chase.

Although Yuvraj was in top form in all departments of the game on Thursday, it was his three-wicket spell that stood out as the defining factor in the match. When Yuvraj came on to bowl, England were well on course to a score of 180 plus. After Michael Lumb fell early, Alex Hales and Luke Wright tore into the Indian attack, which was pedestrian at best. Hales was particularly severe on all the bowlers Dhoni presented in front of him. The fact that Yuvraj was the seventh bowler Dhoni had used before the halfway stage of England’s innings told the tale of India’s ineffectiveness. That was until Yuvraj turned the tables. 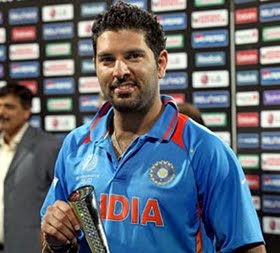 By the time Wright fell to Yuvraj for 34 off 21 balls, England had progressed to 89, at the beginning of the 11th over. From there on, the only way India could have stopped England from reaching 180 was if they continued to pick up wickets. They needed to see the back of Hales desperately, for he had scythed through the Indians. Yuvraj delivered exactly what India needed. He cleaned up Hales for 56 off 35 balls, an innings in which he plundered seven fours and two sixes. At the time of Hales’ dismissal, England had progressed to 99 for 3, but Yuvraj made it worse for England, sending back new skipper Eoin Morgan in the very same over.

Yuvraj’s spell of 3 for 19 was instrumental in crippling the English batting line-up no doubt, but he got excellent support from Ashok Dinda, who bowled a fine penultimate over, picking up two wickets and not giving away many runs. Although England did well in the final over courtesy an onslaught by Jos Buttler, India would have backed themselves to chase down a target of 158, considering they had the batsmen to do so in this format.

Like with the ball, India’s batting also revolved around Yuvraj. The left-hander, who came in after Gautam Gambhir and Ajinka Rahane got India off to a flyer before departing simultaneously, looked in no trouble at all as he slammed 38 from 21 balls. Courtesy his quick-fire innings and his handy partnership with Virat Kohli, who contributed a useful 21, Singh ensured that India’s chase was very much on track. Although Yuvraj fell at a similar stage to when Hales departed in the England innings, the difference here was that India knew exactly what they had to chase, and did the same comfortably courtesy Raina and Dhoni’s alliance.