Australia will take on South Africa in Match number 13 of the T20 World Cup 2021 on Saturday at the Sheikh Zayed Stadium in Abu Dhabi. This will be the first Super 12 match in Group 1. The game will begin at 3:30 PM IST and 2:00 PM local time

The Aussies have had a tough time of it lately. They have lost eight of their last 10 T20Is, being crushed 1-4 in both West Indies and Bangladesh. Although a number of their key players were missing from the twin tours, the results were still below par as far as Australia were concerned.

Looking at the performance in the warm-ups, they scraped to a three-wicket victory against New Zealand before suffering a eight-wicket hammering at the hands of India. Australia have never won the T20 World Cup. Hence, they would be keen to do well in the latest edition. And, to boost their confidence level, it will be crucial for them to start on a positive note. 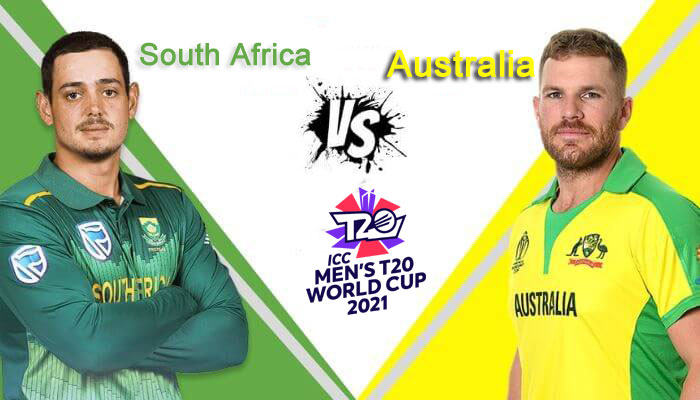 Shifting focus to South Africa, they would go in with a confident frame of mind. They have been in excellent form in T20Is recently, having tasted success in nine of their last 10 games in the format. Their performance in the warm-up games was impressive as well. They registered a comfortable 41-run victory over Afghanistan before chasing 187 against Pakistan with aplomb

The form of openers Aaron Finch and David Warner will be a massive concern for the Aussies although both are big-tournament players. There will be high hopes from Steve Smith, who loves playing against India, and Glenn Maxwell, who had a terrific IPL 2021. All-rounder Mitchell Marsh’s international career has found a new lease of life. He will be someone to watch out for

Rassie van der Dussen scored a scintillating hundred for South Africa in the warm-up clash against Pakistan. South Africa will also be pleased that captain Temba Bavuma got some runs. There will be high hopes from Quinton de Kock as well. In the bowling, Kagiso Rabada and Anrich Nortje will need to be at their fiery best.