Royal Challengers Bangalore through a sound all-round show made Rajasthan Royals suffer a rare defeat at their homeground in Jaipur. This is now the fourth win for the RCB in 7 league games. It was a huge partnership between Tillakaratne Dilshan and AB de Villiers which set them towards a strong total of 189 for 3. And then with the ball, left arm spinner KP Appanna bowled superbly taking 4 for 19 to keep the Rajasthan Royals to 143 for 7.

Batting first after losing the toss, RCB had a slow start in the first half but in the second part of their innings, AB de Villiers along with opener Dilshan took them to new heights. Infact, the RCB were 62 for 2 in 10 overs. Chris Gayle, who wasn’t feeling well came down the order at no.4 but only to get out cheaply leaving his side at 67 for 3 in 11.4 overs. This was when AB de Villiers joined Dilshan to provide the much needed momentum to the RCB innings. AB de Villiers scored a breezy 59* from 23 balls with 3 fours and 5 sixes. Dilshan struggled early on but finished with 76* from 58 balls with 10 fours and a six. 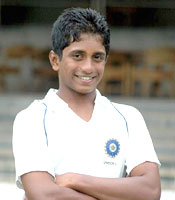 The run chase for Rajasthan Royals started on a bright note with Skipper Rahul Dravid taking the charge. The veteran slowed down through after the powerplay. By the start of the 14th over, Rajasthan Royals were struggling at 91 for 4 with the key moment being the early exit of Owais Shah. Rahul Dravid got out after scoring a 42-ball 58 with 8 fours. The final nail in the coffin for RCB was hit when Brad Hodge perished cheaply leaving his side at 101 for 5 in 14.5 overs. The visitors settled eventualy for a modest 143 for 7 in 20 overs.

KP Appanna was the star with the ball as he got it to turn away sharply along with bounce to trouble most of the Rajasthan Royals batsmen. He was also responsible in taking the big wicket of Owais Shah. Appanna conceded only 19 runs in his 4 overs while taking four wickets! The Man of the Match award was given to AB de Villiers but the South African sportingly gave it away to his team mate KP Appanna for his bowling efforts.

Toss and Teams: Rahul Dravid, Captain of Rajasthan Royals has won the toss and invited Royal Challengers Bangalore to bat first at the Sawai Mansingh Stadium. The pitch at this venue in Jaipur this season has yielded plenty of runs and has shown signs of some decent turn.

Vettori says that Tillakaratne Dilshan and KP Apanna return back to the side for the RCB. Dilshan replaces Andrew McDonald. For the Rajasthan Royals, tall seamer Pankaj Singh comes back into the XI.