1996 saw a rekindling of my previously waning appetite for the 50-over game. Sri Lanka had made the cricketing world sit up and take notice by its tactics in the One Day Internationals (ODIs) during its 1995/96 tour of Australia.

1996 saw a rekindling of my previously waning appetite for the 50-over game. Sri Lanka had made the cricketing world sit up and take notice by its tactics in the One Day Internationals (ODIs) during its 1995/96 tour of Australia. Openers Sanath Jayasuriya and Romesh Kaluwitharana stunned the cricketing world with their staggering front-innings assault. Maximizing the effect of the fielding restrictions in the first 15 overs, the Sri-Lankan swashbucklers, every game, launcheda stunning air-attack, hitting over the infield and running up previously unheard of totals at the end of the 15 overs. 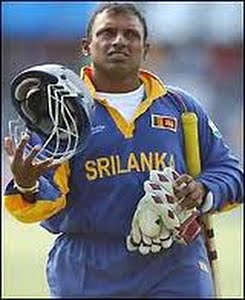 This they carried into the World Cup in February and March where they were co-hosts alongside India and Pakistan. Anything around 60 or so after 15 overs was considered a good score. This convention was turned on its head when Sri lanka ran up scores of well over a hundred in the early rounds. It was not a completely new tactic: in the 1992 World Cup, New Zealand’s Mark Greatbatch achieved some success by employing similar methods. But the Sri Lankans turned it into an art form from which they never wavered, lifting the trophy at the end of the 1996 tournament.

Yet it didn’t always go to plan. During the semi-final game at the Eden Gardens against India things went horribly awry when Sri Lanka lost both openers with a single run on the board. Kaluwitharana threw his bat at a short and wide one, the first delivery he received, and only succeeded in planting it in third man’s grasp. In the very same over, the first one of the game, Jayasuriya perished in the same vicinity, stepping out to slash Javagal Srinath.

Then came a passage of play that will not easily be forgotten. Aravinda de Silva strode to the crease with a gaze that signaled deep determination and a confidence that belied the predicament his team faced. The first boundary of the innings ran off his outside edge and a short time later there was an edged drive that also went for four. Those were the only moments of uncertainty, except, of course, when he was bowled by Anil Kumble.

He added 33 with Asanka Gurusinha, whose share was only one run. By that time he had driven Srinath exquisitely,on the rise, to the cover boundary. Agarker was swung around to the fine leg for four before being pulled high, landing just inside the midwicket boundary.

Dav Whatmore, the Sri Lankan coach, said sometime after the game that they were always aware that their raucous method could always lead to a score of nothing for two or three wickets. And the response of De Silva was the one they felt was best. He bombarded to cover area, and never once failed to pierce the field. One very precise drive bisected two fielders who were almost handholding distance apart; another brought him to his fifty.He glanced delicately, and anything on his legs went to the midwicket fence.

De Silva departed for 66 with the score at 85/4. Kumble somehow hit his stumps with a googly when everyone must have thought it impossible to get past his bat. Writing in his autobiography he related that at the time he felt he could have gone on to 150. He had faced 47 deliveries from which he had scored 14 boundaries. It was an awesome display that stunned the Indians and curtailed their elation at getting three cheap wickets.

Sri Lanka went on to score 251 from their 50 overs and won the match by default when crowd interruption forced the authorities to award them the game that India was well on the way to losing. A few days later de Silva scored a polished 107 and lead his country to a fairly comfortable win against Australia to become World Cup champions.

There have been quite a number of spectacular hands that are pointed to whenever great limited overs innings are discussed. Viv Richards’ 189 perhaps, or Sachin Tendulkar’s double hundred. Or any number of innings by Brian Lara or Virender Sehwag or Chris Gayle. For me, however, Aravinda de Silva’s 66 in Kolkata in the 1996 World Cup semi-final, was the very best.