With 23 required off the last over, Dhoni kept his cool and smashed three sixes and a four to help Pune finish seventh in 2016 Indian Premier League standings. This knock also helped Rising Pune Supergiants to avoid the bottom place in the points table. With Mohit Sharma and Sandeep Sharma finishing their quota of 4 overs, Murli Vijay opted to go with Axar Patel instead of others like Kyle Abbott. Dhoni has struggled for timing and power throughout this season but this task of 23 in last over wasn’t beyond him. The Supergiants captain sealed it with twin sixes and finished with 64 not out off 32 balls. He later said it could have been the "kind of game the team wanted to win to get into the knockouts."

Thisara Perera joined Dhoni in the 14th over after Pune were reduced to 86 for 5. First, Perera started the counter attack and dispatched Kyle Abbott for three boundaries in the 16th over. Then Dhoni smashed Sandeep Sharma for two boundaries when he missed the Yorker in the 18th over and brought the equation to 29 needed off 12 balls. Thisara Perera was dismissed by Mohit Sharma caught behind on first delivery of 19th over and then Dhoni put away third ball for four but Mohit came back strongly and gave away only one run in the last three ball.

KXIP’s seamers struck to disciplined line and length and not allowed Pune’s openers to run away and kept them checking their shots. Ajinkya Rahane was dismissed by Sandeep Sharma and then Bailey joined Khawaja on middle but none of the duo could get their timing right. Gurkeerat Singh Maan got couple of over in 12th over when he get rid of Usman Khawaja and Saurabh Tiwary in the same over. 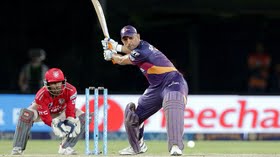 Earlier, Gurkeerat scored his maiden IPL half-century which included three fours and three sixes. He added 58 runs for the third wicket with skipper Murli Vijay to laid the foundation for a big score. Vijay and Amla started the inning steadily for Punjab where Vijay took his time and Amla took the responsibility of hitting and managing the run rate. The subsequent introduction of spin, however, applied the brakes on the innings. While R Ashwin claimed 4 for 34, his best IPL figures, Adam Zampa enhanced his growing reputation with 1 for 32. He got the ball to turn, bounce, and dip, even as Vijay completed his fourth half-century in eight games as Kings XI captain.

A slog to a straighter one from Ashwin bowled Vijay by the 16th over. Kings XI then plundered 48 off the last four overs, but they were left with the wooden spoon for the second successive season.