Bhuvneshwar Kumar could be the ideal replacement for Zaheer Khan

Yes, it is too early to make such a statement. Bhuvneshwar Kumar is way too raw to fit into the veteran Zaheer Khan’s shoes. Also, India have another senior bowler, Ishant Sharma, who ideally should take over the mantle of India’s lead paceman, once the left-arm seamer officially calls it quits.

Yes, it is too early to make such a statement. Bhuvneshwar Kumar is way too raw to fit into the veteran Zaheer Khan’s shoes. Also, India have another senior bowler, Ishant Sharma, who ideally should take over the mantle of India’s lead paceman, once the left-arm seamer officially calls it quits. Still, from the little we have seen of Kumar in the last six months, at least one conclusion can be arrived at – he has the ability to be India’s next strike bowler. Whether he proves the hypothesis right is another matter altogether.

Let’s dwell on the positives first. The most impressive aspect of Kumar’s performance in his short international career so far has been his ability to get big wickets right at the top of the innings, with deliveries that can undo the best of batsmen. His three-wicket burst late on day four of the Mohali Test was the latest testimony of Kumar’s ability. Reputations clearly don’t seem to bother him. He got David Warner to edge one very early on in the innings, and even though Ed Cowan was standing way out of his crease, Kumar’s line did not waver. On the contrary, the young paceman beat Cowan at his own game, and trapped him plumb in front. 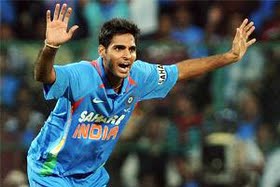 Last but, for certain, not the least, the ball he bowled to get rid of Steven Smith was an unplayable one. It came in through the angle, and left the batsman at the last moment. Smith, who had hit form following his 92 in the first innings, had covered the line of the ball; there was nothing more he can do other than shake his head in disbelief as the ball beat his defence and crashed into the off-stump. It was the kind of delivery that makes one believe Kumar is definitely one of the future, if he can keep improving on the obvious talents he possesses.

The heartening aspect of Kumar’s bowling in his short career has been his consistency. He has picked up crucial wickets at the top of the order right from the time he made his international debut in the one-dayers against Pakistan. His seam position is impeccable at most times, the chief reason why he pitches the ball in the right areas more often than not. Also, he has the ability to bowl the long spells, which demonstrates that he is rather fit, although his lean figure may give another impression. All of Kumar’s qualities were at display at Hyderabad, where he picked up the first three wickets on the opening day of the Test, to set up the match nicely for India.

If there is one area where Kumar needs to significantly improve his bowling, it is his performance with the old ball. To be fair to him, Dhoni hasn’t utilised him much under the above-mentioned conditions, but the fact that a majority of his wickets come at the beginning of the innings points towards his weakness with the old ball. He is still young though, and if he can improve his overall game, Kumar can be a great asset for India in times to come; not to forget that he can bat too.