If there is one team in world cricket on whom the cliché ‘flattered to deceive’ sits perfectly, it has got to be South Africa. At their peak, Australia were ruthless, India boisterous and England meticulous.

If there is one team in world cricket on whom the cliché ‘flattered to deceive’ sits perfectly, it has got to be South Africa. At their peak, Australia were ruthless, India boisterous and England meticulous. For that matter, Pakistan have always been predictable. With South Africa, the ‘touted to win’ tag has always followed them, but in spite of having that ‘perfect’ look about them, they somehow manage to falter before crossing the finishing line. 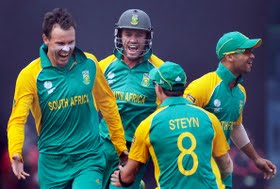 During each major tournament (read World Cups) they raise hopes only to end up disappointed. The 50-over World Cup in the sub-continent last year was the latest example of the same. South Africa cruised through to the quarters, only to run into New Zealand, who were in a way lucky to find South Africa so out of sync on the big day. Present T20 skipper A B de Villiers has admitted that South Africa have failed to handle the pressure of expectations in the past, but also asserted that this team is carrying no baggage of history. They kick off their World T20 campaign at Hambantota against the unfancied Zimbabweans, and would like to make a statement of intent right away.

For South Africa to do well in the tournament, de Villiers’ performance will be key. Not only is he the team’s best batsman, but also their wicket-keeper and, above all, leader. His job should be to try and keep the players calm. Lack of relaxation is possibly one of the reasons why South Africa have failed in the past. There were times when it seemed they were trying way too hard to prove themselves.

Starting against a weak side like Zimbabwe should be to South Africa’s advantage for sure. That Sri Lanka demolished the Zimbabweans so easily could also make things simpler for South Africa, as it is difficult to see Zimbabwe recovering from the massive jolt the hosts of the tournament gave them just a couple of days back. At best, Zimbabwe would try to put up an improved showing against South Africa. The question is whether they have the capability and the resources.

Except for leggie Graeme Cremer no one made any impact against Sri Lanka. Cremer’s performance could prod Zimbabwe to bring in left-arm spinner Ray Price against the Proteas, considering the latter’s perceived weakness against spin. But that change alone will not be enough. Zimbabwe will have to show marked improvements in all other aspects of their game.

As of now, there aren’t too many worried for South Africa. They are only waiting over big-hitter Albie Morkel’s fitness. Both spinners Johan Botha and Robin Peterson are expected to play considering Zimbabwe’s herculean struggles against the Lankan tweakers. South Africa would be keen for the likes of talented but inexperienced players like Richard Levi to fire. Substantial knocks against the Zimbabweans would give them the desired confidence going into the bigger challenges. The series has just begun, so it’s too early for South Africa to focus on the end.