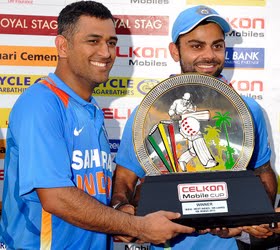 India have another ODI title and as has been the trend, it is Dhoni who plays the swashbuckler in the end. Sri Lanka had done everything right in the second innings. They kept their bowling water tight throughout the innings defending a middling total, but the pitch had enough in it to keep the bowlers interest. Then around the powerplay overs, they started carving through India's middle order and were in touching distance of that elusive title, but again, it was that man against them. He averaged over 80 against Sri Lanka in chases before the start of this match. It has gone a few steps over now. Sri Lanka's wait for a title continues. For India, was it not for a calm innings by Rohit at the start, the situation could have been far worse

MS Dhoni and Virat Kohli accept the winners trophy (after the presenter had forgotten about it). 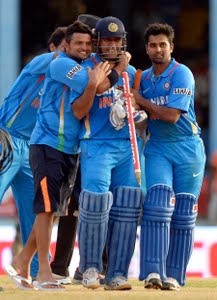 MS Dhoni is the Man of the Match.

"I think I am blessed with a bit of good cricketing sense," says MS Dhoni. "15 players have been very good on the field and that is a good sign. The opposition bowler was not the most experienced in that last over unlike Malinga, so I thought i would take my chances. I went with a heavy bat, the weight was perfect for slogging."

Rohit Sharma gets an award for being the most trusted player. "I am really happy with the way we performed," he says. "The wicket was not easy to play shots, I wanted to delay my shots and wanted to stay as long as possible in the middle. (In the last over) We have seen Dhoni doing it over and over again, so it was not so much of a surprise."

Bhuvneshwar Kumar is the Player of the Series. He gets a quad-bike to rule the the mean streets of Meerut.

"It was a great game, the bowlers showed a lot of character to defend 200,"says Angelo Mathews. "Sanga and Thirimanne batted really well, but we lost momentum after that. Had we played till the end, we could have pushed it to 230-240 and that wuould have been enough. Herath bowled really well to bring us back into the game, but Dhoni is always a dangerous batsman. We played a good tournament throughout, didn't win the title, but the players showed a lot of character."

Kohli, who otherwise averages 54.70 against Sri Lanka in ODIs (five 100s, eight 50s), averages only 26 in tournament finals against them, with no fifty-plus scores.

It's been 13 ODIs, stretching back to last November, since Jeevan Mendis either scored 30 runs or took more than one wicket. 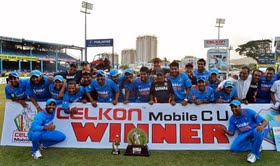 In the first ten overs of ODIs this year, no one has more wickets than Bhuvneshwar, who has 13.

India beat Sri Lanka by 81 runs under the D/L method and the two teams will play each other again in the final on July 11.

MS Dhoni injured his hamstring during India's first match of the Caribbean tri-series, could play in the tournament's final if India make the top two, according to stand-in captain Virat Kohli. Dhoni had done a bit of running during India's warm-ups ahead of their match against Sri Lanka on Tuesday. Kohli said at the toss that he could be ready to play the final should India make it.