Undervalued Chris Martin can be proud of his achievements

To play 71 Tests for your country is no mean feat. And for this more than any other reason 38-year-old Chris Martin can be proud of himself.

To play 71 Tests for your country is no mean feat. And for this more than any other reason 38-year-old Chris Martin can be proud of himself. The Kiwi paceman was never the centre of attraction in the New Zealand Test side in spite of the fact that he was a regular in the side for nearly a decade. Martin’s 233 Test scalps put him third in the list of top New Zealand Test wicket-takers, behind only two other legends, Sir Richard Hadlee and Daniel Vettori. That is quite a massive achievement for someone who was nowhere near as talented as the other two names before him in the top wicket-takers list.

When Martin made his debut back in 2000, no one expected him to go onand play as many as 71 Tests and grab over 200 wickets. But Martin’s relatively successful career will remain another testimony to the fact that with grit and determination one can be an achiever. Accuracy was Martin’s greatest strength, but on his day he could be lethal as well. Remember, he grabbed 11 wickets for 180 runs in the 2003-04 Test against South Africa at Auckland, a bowling effort which turned out to be a match-winning one. Ten five-wicket hauls and as many four-wicket hauls in 71 Tests stand testimony to his consistency. 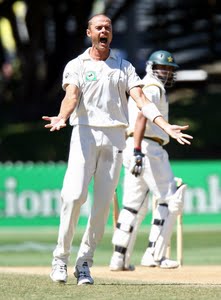 That Martin wasn’t highly talented is rather obvious, which is why he ended up with a bowling average of nearly 34. At the same time, he troubled some of the best batsmen in the business at his peak. Martin was particularly effective against the South Africans against whom he grabbed 55 wickets at an excellent average of 27. He dismissed none other than the Proteas skipper Graeme Smith on eight occasions and the great all-rounder Jacques Kallis on six occasions – that tells a story in itself.

Since Martin was not successful against all countries he won’t be remembered among the best bowlers of this era. He averaged nearly 65 against the best team of the last two decades – Australia. At the same time, it must be remembered that the circumstances he played under were not always the best. Shane Bond was supposed to lead the New Zealand attack during Martin’s peak years and he was supposed to be the back-up pace bowler. However, more often than not, Bond was out injured as a result of which Martin was, by default, thrust into the position of the team’s strike bowler. And, considering he wasn’t gifted for the post, he did a commendable job.

Martin was always chided for his poor batting skills, as a result of which his appearances in the shorter format were limited. There have few worse batsmen in the history of the game. Then again, Martin’s primarily responsibility was to bowl, and he did that wholeheartedly. The results were not always there to show, and Martin often looked out of place when the conditions were not in his favour. All said and done though, nothing can take away from the fact that in spite of all his limitations Martin served New Zealand with distinction.