In the run-up to the sixth match, it was clear that South Africa would need to win Wednesday's match against hosts West Indies to stay in with a good enough chance of making it to the final.

In the run-up to the sixth match, it was clear that South Africa would need to win Wednesday's match against hosts West Indies to stay in with a good enough chance of making it to the final. Their task, however, wasn't going to be easy as they were up against a rampant Windies outfit that had outdone Australia with skill in previous match. That said, it is no secret that on their day, South Africa can be unbeatable. It was that kind of a day for the Proteas on Wednesday. With the bat, they rollicked away, with contributions coming all-round. And with the ball, they were all over West Indies, cleaning them up without much trouble.

Batting first, South Africa's excellent start went a long way in them setting up the game nicely. In the previous matches, the Proteas had struggled since their batting hadn't lived up to potential. But, Hashim Amla ensured nothing of that happened, easing his way to his another one-day ton, and in process, putting his team in a position of strength. Amla never looked troubled by the West Indies bowling, and that was the beauty of his knock, as he killed the Windies with finesse. At the other end, Quinton de Kock was struggling, but he played the perfect team man, giving Amla as much strike as possible, and thus ensuring his lack of languidness did not affect the team.

West Indies made an interesting change in the batting, sending in all-rounder Chris Morris at number three, even though AB de Villiers and Faf du Plessis were still in the waiting. The move was debatable since Morris is not known to play the big innings, but instead is a big hitter renowned for his cameos. Perhaps, that was what was in de Villiers' mind, as he promoted the hard-hitting Morris. The all-rounder, returning from injury, came up with the goods, and delivered just what the captain expected of him. With the wonderful platform being built, du Plessis came in and took the match further away from Windies with a brisk fifty.

Having conceded 330 plus, the only way West Indies were going to compete was if their batsmen played out of their skins. But, they did not seem to inspired on the day. Or perhaps the Proteas were just in a ruthless mindset. Andre Fletcher and Johnson Charles got the team off to a decent start, but with the pressure mounting Imran Tahir took complete control of the innings. He broke the opening stand by sending back Fletcher, and there was no looking back as he finished with seven wickets. The high-point of his performance was undoubtedly sending back the trio of Jason Holder, Craig Braithwaite and Kieron Pollard in one over. But, his dismissal of in-form Marlon Samuels was equally important. 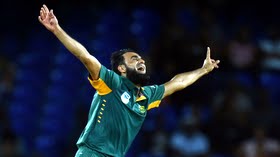 While West Indies should be disappointed with their batting effort, as only Johnson Charles got close to a fifty, it was their bowling that was the real villain on the day. Almost all the pacers went for plenty, failing to exercise any sort of control on the South African batsmen. The experienced yet inconsistent Jerome Taylor was thrashed at nine runs per over, skipper Holder conceded 8.5 runs per over while Pollard went at over 7. The spinners Sunil Narine and Suliemann Benn managed to keep things tight, but before and after them, and for the majority of the match, it was a story of South African domination.