Virat Kohli and the Indian team management have been backing wicket-keeper batsman Rishabh Pant at number four since the World Cup, despite his constant failures. However, India legend Sunil Gavaskar does not support the move and feels Shreyas Iyer is much-better suited to the position.Iyer came into bat after Pant in the second ODI against West Indies, and impressed with a 68-ball 71. He featured in a century stand with skipper Kohli, which went a long way in India cementing a 59-run triumph in the match at Port-of-Spain on Sunday.Explaining why he feels Iyer is a better option than Pant at number four, Gavaskar told Sony Ten, “In my view, Rishabh Pant is much better like an MS Dhoni at 5 for 6 as a finisher because that’s where his natural game and natural flair will come into play." 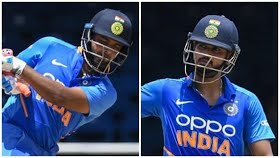 “If India get to a great start with Virat Kohli, Shikhar Dhawan and Rohit Sharma batting for 40-45 overs, then Pant at No. 4. But if it’s a question of batting for 30-35 overs, then I think it should be Shreyas Iyer at No. 4 and Pant at No. 5," Gavaskar added.Iyer's solid innings was important in the match as India had lost both openers Rohit Sharma and Shikhar Dhawan early and Pant too fell after getting a start. Gavaskar praised Iyer's consistently who has now got three ODI fifties despite having a stop-start career.He has grabbed his opportunity. He came at No. 5. He had plenty of overs. He had the company of his skipper, Virat Kohli. Nothing quite like it because the skipper takes the pressure off you. The best place to learn in cricket is the non-striker’s end. That’s what Shreyas Iyer was doing with Virat Kohli at the other end,” Gavaskar explained.The former captain-turned-commentator was surprised that Iyer was left out of the World Cup squad but believes the time has come to give the youngster a longer run now. “I think, if this doesn’t help him get a more permanent slot in the Indian middle-order, I don’t know what will,” Gavaskar said.“In the five matches, he played before this, he scored 2 fifties and hit a highest score of 88. He hadn’t done anything wrong to be left out of the World Cup. But that’s in the past. Now he has come back and scored a 71 in his first opportunity. So I think he will get a longer run," the India great signed off.--By A Cricket Correspondent