Seven-year-old Archie Schiller has been added to the Australian squad for the Boxing Day Test match against India at the Melbourne Cricket Ground. Wondering why? Well, his selection is as part of an initiative between Cricket Australia and the Make A Wish foundation. Schiller suffers from congenital heart disease,

According to an Indian Express report, he was invited by Aussie coach Justin Langer for training with the squad ahead of the first Test in Adelaide. While interacting with Langer, Schiller said he wanted to be an offspinner and take the wicket of Virat Kohli. He also revealed that Nathan Lyon is his favourite player. 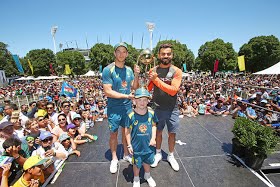 The third Test between India and Australia kicks off on December 26th at the MCG. While India won the hard-fought first Test at Adelaide, Australia came back to register a thumping win at Perth, their first since the shocking ball-tampering scandal.