In the preview to the semi-final between India and West Indies, all the talk was about two men – Virat Kohli and Chris Gayle. The former continued his brilliant run with an unbeaten 89 from 47 balls while the latter was dismissed for merely 5

In the preview to the semi-final between India and West Indies, all the talk was about two men – Virat Kohli and Chris Gayle. The former continued his brilliant run with an unbeaten 89 from 47 balls while the latter was dismissed for merely 5. But, West Indies showed there was more to them than just Gayle as they gunned down a tough target of 193 on a belter of a pitch at the Wankhede Stadium in Mumbai. Lendl Simmons, who came into the side only because Andre Fletcher was injured, smashed an unbeaten 82 from 51 balls, to take the team over the line. Opener Johnson Charles produced the early charge with 52 from 36 while Andre Russell powered himself to 43 from 20 as West Indies muscled to the target with ease, stunning a packed house.

After Gayle was bowled by a fast, low full toss by Jasprit Bumrah early in the innings, and Marlon Samuels perished giving a tame catch, it was all about fours and sixes for the West Indian power-hitters. Charles and Simmons featured in a brilliant 97-run counterattacking partnership for the third wicket, and Simmons and Russell finished off the Indians with ease. Simmons hit seven fours and five sixes in his innings while Russell blasted three fours and four sixes. While West Indies batsmen were too good for India, the bowlers did not make things easier for themselves. Ravichandran Ashwin and Hardik Pandya picked up wickets off no-balls. Both times, the lucky batsman was Simmons, and it ended up being his day. 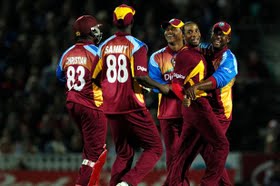 Windies’ brilliance overshadowed Kohli’s tremendous batsmanship. Even before the second semi-final between India and West Indies kicked off, it was known that Kohli would be the dangerman for the Windies. The latter had more than more chance to send back Kohli, but failed to so, succumbing to pressure, and India’s number three made them pay for the same. In the 9th over, when Kohli had just walked in, he tried to set off for a non-existent single, after missing a free-hit. But, the keeper could not hit the stumps. The ball however went to the bowler Dwayne Bravo, with Kohli still out of the crease. Shockingly, he missed the target as well.

There was one more close shave for Kohli as next ball as he came back for a quick second. Denesh Ramdin failed to collect the ball else he would have been run out again. Once Kohli passed that nervous phase, he was well in his elements. Kohli’s counter-attack began when he pulled and edged Carlos Brathwaite for fours in the 17th over. He then flat batted Bravo for a lucky boundary as the ball went under the long on fielder. The over ended with a blazing four through long-off. With two overs to go, India were set for the final push, and Kohli provided the same.

In the penultimate over by Russell, Kohli blazed a length ball for six over long on, and followed it with fours cover, and one past the ground with a full toss. While Kohli was again the star performer as India finished on an impressive 192, the decision to drop Shikhar Dhawan proved to be fruitful as home boys Ajinkya Rahane (40) and Rohit Sharma (43) finally got India off to a bright start. Rahane rotated the strike well, and ran hard between wickets as Rohit roared back to form. He launched Brathwaite for a six over long-on, and proceeded to hit consecutive sixes off Andre Russell, one being a free hit, before Samuel Badree foxed him with the arm ball. Against an explosive, Windies batting line-up, nothing was enough.