Following a redemptive win in the dead rubber at Adelaide against South Africa, to go with the 3-0 thrashing of Kiwis in the Trans-Tasman rivalry during the course of the Chappell-Hadlee Trophy,

Following a redemptive win in the dead rubber at Adelaide against South Africa, to go with the 3-0 thrashing of Kiwis in the Trans-Tasman rivalry during the course of the Chappell-Hadlee Trophy, Australia will be a highly confident lot heading into the day/night Test at Gabba in Brisbane. Of course, they were battered 3-0 in Sri Lanka before that, and also lost the Test series at home against the Proteas. But, the hosts would like to believe that their recent performances is what should matter. Pakistan also faced New Zealand in the Tests, but could not repeat the heroics of England, where they managed to earn a credible draw. The task would only be tougher against the Aussies at home.

History as well as the current form of the two teams puts Australia up there as favourites, especially under the conditions which would be on offer. That's not all, they have the advantage of reasonable experience playing under lights with the pink ball, something which Pakistan lack. In fact, Australia's most recent victory against South Africa also came in a day-night Test in Adelaide. That could also be a major factor as players are likely to take time getting used to the conditions. Add to it, Australia's impressive record at the Gabba, and they become doubly dangerous on paper. The last time these two teams met at the venue, Adam Gilchrist smashed the Pakistani bowlers on his debut.

Australia cannot get too complacent though. If you take out the Adelaide Test against the Proteas, their Test form has been disastrous. The new-look team will now have to stand up to the Pakistani pace challenge. The fast bowling department is one area where the visitors can trouble the Aussie batsmen, provided they get it right. This is why the performance of the top order will be highly significant. David Warner and Usman Khawaja will have a major role to play considering the weak middle order, which itself will have to be shored up by skipper Steven Smith. With Matt Renshaw as opener, and Peter Handscomb and Nic Maddinson in the middle, Pakistan have an opening to target. 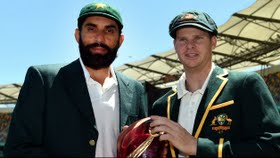 It is however a tit-for-tat case as Pakistan's batting themselves would be up against a formidable pace battery that the Aussies have at their disposal. Mitchell Starc has been only getting better with each game on return. He would be confident of performing well. Same would be the case with Josh Hazelwood. If Jackson Bird builds up the pace he could be a handful too, not to forget the spin of Nathan Lyon. Pakistan are not as inexperienced as the Aussies in the batting. But, Younis Khan had a torrid time in New Zealand while Misbah-ul-Haq missed the previous Test over there for personal reasons. Pakistan need both of them in great rhythm along with Azhar Ali.

As mentioned earlier, pace is one department where Pakistan could unsettle the Aussies. In Wahab Riaz and Mohammad Amir, they have two of the best exponents of left-arm pace bowling in the world. But, there are also days when they produce absolutely rubbish performances. Of course, it would help greatly if the fielders hold on to their catches. Pakistan often play merry-go-round with their third pacer. At Gabba, Rahat Ali is likely to feature in the playing eleven. A big point of interest would be how Yasir Shah recovers from the pasting he received on unfriendly conditions. Gabba is expected to offer some purchase. Can he make good use of it?