Just the 8 overs were possible in the final session before the Umpires had no choice but to suspend play and then call it off later because of the gloomy overhead conditions at Durban.

Just the 8 overs were possible in the final session before the Umpires had no choice but to suspend play and then call it off later because of the gloomy overhead conditions at Durban. India did incredibly well through to survive the torrid little session facing a barrage of short deliveries from Steyn and Morkel in bad light conditions.

Murali Vijay, in particular did very well swaying away from the vicious short stuff from Steyn to remain unbeaten on 91 (from 201 balls with 17 fours). Vijay after Tea went after Robin Peterson to jump into the 90s. Pujara at the other end moved to 58* from 117 balls. India by the close of play on Day 1 are 181 for 1 in 61 overs. Play will start early by 30 minutes on Day 2. 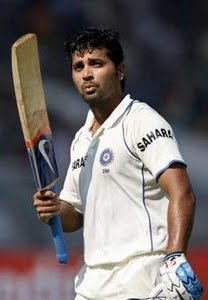 Update at Tea on Day 1: India look good for a healthy first innings total at Durban thanks to a solid unbroken stand of 122 for the 2nd wicket between Murali Vijay and Cheteshwar Pujara. The visitors at Tea have moved to 163 for 1 in 53 overs.

The afternoon session saw not a single wicket go down in 27 overs. There is still enough challenge ahead for the Indian batsmen as Dale Steyn has been getting the ball to reverse swing at 145 kmph speeds. Morne Morkel has looked potent as well although the other bowlers – Philander and Peterseon have looked pedestrian.

By Tea, Murali Vijay has got to 76* from 167 balls with 14 fours. Pujara has been rock solid on 55* from 103 balls with 7 fours. Meanwhile the light at Kingsmead has deteriorated though because of the cloudy conditions.

Update at Lunch on Day 1: A good first session saw India at 76 for the loss of Shikhar Dhawan in the 26 overs bowled by the South Africans. The pitch looked lifeless and it was just the odd ball that was moving around off the seam. There wasn’t much pace or vicious bounce on offer for the bowlers.

Mornel Morkel looked like the most effective bowler and it was he who broke the Indian opening stand. The very first ball after drinks, Shikhar Dhawan seemed to have lost his concentration, as he pushed away from his body with hards to edge Morkel to third slip. Dhawan was looking very confident until then having scored 29 with 4 fours.

India went to lunch losing only one wicket as Murali Vijay and Cheteshwar Pujara batted solidly. Vijay has worked hard to get to 33* from 76 balls with 7 fours while Pujara is early in his innings, batting on 13*.

Toss and Teams: India have won the toss and elected to bat first in the Second Test at Kingsmead in Durban. The tourists have made one change with Ravindra Jadeja coming in for R Ashwin. SA too have made one change with Robin Peterson coming in for Imran Tahir. Mornel Morkel has made an unexpected recovery from his ankle injury to play in this deciding match of the series.

This Test match will see Jacques Kallis hang his boots in this version of the game. As far as the pitch is considered, it is going to be on the slower and drier side. It is likely to take turn as the game progresses.