The New Zealanders were thrashed 3-0 in the recently concluded Test series. Naturally, not a lot of them had a good time. Here’s rating New Zealand’s performance in the series on an individual basis

The New Zealanders were thrashed 3-0 in the recently concluded Test series. Naturally, not a lot of them had a good time. Here’s rating New Zealand’s performance in the series on an individual basis. 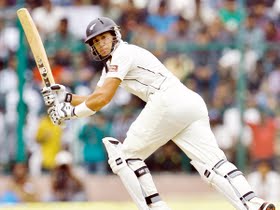 Tom Latham (7/10): He was by far New Zealand’s most consistent batsman in the series. And yet, he managed only 194 runs in the series at a not so great average of 32.33. He got three fifties in six innings with a highest of 74. But, he should ideally have converted those into big scores. 58 and 53 point towards two missed opportunities.

Trent Boult (7/10): In a series dominated by Indian bowlers, Boult was a silver lining for New Zealand. He toiled hard for his 10 wickets at an average of 33.30 with a best of 3 for 38. It was a praise-worthy effort.

Mitchell Santner (6/10): He began the series on an impressive note, doing well with both bat and ball, but petered away as the series progressed. He still finished with decent batting numbers 159 runs at an average of 26.50, and a best of 71. With the ball, he managed as many wickets as Boult, but at a much higher average – 52.40.

Luke Ronchi (5/10): His hundred in the tour game earned him a place in the playing eleven as a pure batsman. He looked in great touch initially, and made 80 at Kanpur. But, Ronchi failed to convert his starts at Kolkata, and failed at Indore making it a mixed series for him.

Matt Henry (5/10): His figures may tell a different story, but Henry was highly impressive in Kolkata when he picked up three wickets in both innings.

Martin Guptill (4/10): He struggled in the first two Tests and was under immense pressure going into the final match. Guptill resurrected himself somewhat with a 72 at Indore, but that his only notable contribution in a forgettable series.

Jimmy Neesham (4/10): He got 71 in the first innings at Indore, which was a class act. With the ball though, he was found out under the conditions in the only Test he played.

Kane Williamson (3/10): The New Zealand skipper was supposed to be the backbone of the team, but apart from the 75 at Kanpur, he did not do much. He was dismissed by Ravichandran Ashwin every time he batted.

Ross Taylor (2/10): To say he had a torrid tour would be an understatement. 89 runs in six knocks tells the story. He too was clueless against Ashwin, and the 35 he scored was all about desperation.

Henry Nicholls (1/10): He came in for the one game when Williamson was injured, but could not do much to keep his place.

Jeetan Patel (3/10): He wasn’t too impressive with the ball, claiming six wickets in two Tests. His 47 with the bat at Kolkata was entertaining.

Neil Wagner (2/10): The pacer tried hard, but five wickets from two Tests are testimony to his struggle.

Ish Sodhi and Mark Craig (2/10): They picked up three and two wickets respectively in the only Test that they played.