Among the euphoria of Virender Sehwag's expected retirement, a struggling Team India would take on an inspired South Africa at Chennai, with both teams having plenty to play for. A win for South Africa would mean the series would be theirs with a game to go

Among the euphoria of Virender Sehwag's expected retirement, a struggling Team India would take on an inspired South Africa at Chennai, with both teams having plenty to play for. A win for South Africa would mean the series would be theirs with a game to go. As for India, they would be desperate to register a victory, and head into Mumbai with the series squared 2-2. Chepauk is the venue where Sehwag played a number of his game-changing knocks, and putting up a fearless performance would be a good way for Team India to pay tribute to the retired legend. On current form, it would be a tough ask though.

Poor batting is primarily why India have found themselves in this troublesome position. In two out of the three games, they lost chasing from what seemed a comfortable position. India will do well not to tinker with the batting order at Chennai, which also hasn't helped the team's cause. Virat Kohli may have registered a half-century at Rajkot, but it wasn't the kind of knock that will bring him back in form. He looked scratchy throughout, and will have to do better in Chennai if India are to find themselves in a reasonable position. Ditto for opener Shikhar Dhawan. It is about time he got a big score in the series.

In a situation that sounds rather ironic, if you take away Rohit Sharma, no other Indian batsman has displayed the desired consistency. The situation was quite the opposite in the past. Even MS Dhoni who got decent scores in all three games hasn't looked fluent, apart from the 92 he scored at Indore. The biggest worry of all for India in the batting department would be the form of Suresh Raina. The southpaw has walked into tense situations no doubt, but he has thrived in the past under pressure. As Dhoni, rightly stated, Raina needs to spend some time out on the middle. But, for that the likes of Dhoni and Kohli must ensure that he has the time to do the same. 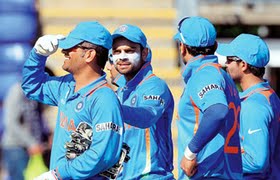 In the bowling, India have made one change, with Sreenath Aravind replacing Umesh Yadav. The newcomer is not expected to play though as India are likely to stick to their three-spinners combo. The biggest worry though for India right now would be the legal trouble Amit Mishra finds himself in. The controversy could not have come at a worse time for the cricketer, as he was just about beginning to flourish consistently for the national side in all formats. Whether Mishra is mentally strong enough to bowl under such a situation remains to be seen. With so much on-field trouble already ailing them, this was the last thing Indian cricket needed.

As for the Proteas, they have been dealt with a big blow as experienced all-rounder Jean-Paul Duminy has been ruled out of the remainder of the series due to injury. South Africa have recalled Dean Elgar in his place. But, it is most likely that Khaya Dondo is handed a debut as he can also bowl off-spinners. Overall, South Africa would be pleased with their effort in the series so far. Morne Morkel stood out with his match-winning effort at Rajkot while AB de Villiers got a hundred in the first match. The experiment with David Miller at the top is likely to continue. If South Africa stick to their game plan at Chennai, they could very well seal the series.