Wicket Keeper Kamran Akmal played a sizzling knock while Shoaib Malik came up with a cool and composed cameo as Pakistan defeated India by five wickets in the warm-up match at the Premadasa Stadium.

Wicket Keeper Kamran Akmal played a sizzling knock while Shoaib Malik came up with a cool and composed cameo as Pakistan defeated India by five wickets in the warm-up match at the Premadasa Stadium. The duo carried Pakistan to a thrilling victory with five balls to spare from a hopeless situation of 91 for 5 in the 12th over in a stiff run chase of 186.

R Ashwin brought early into the fourth over proved to be a lucky charm for India as two wickets went down to have Pakistan wobbling at 33 for 2 early in their run chase. First Ashwin got Imran Nazir (13) miscuing a lofted shot to long on while one down bat Nasir Jamshed was run out smartly by MS Dhoni without facing a ball! 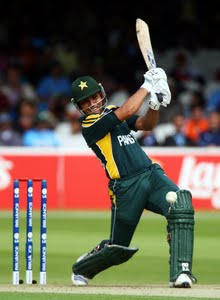 Skipper Mohammad Hafeez looked very good along with Kamran Akmal as the pair pushed Pakistan forward. Just when everything seemed to be fine, Hafeez (38 from 29 balls with 4 fours and a six) perished trying to hit Ashwin over long on for maximum. A couple of balls later in the 10th over, Shahid Afridi holed out to long off for a duck leaving Pakistan at 84 for 4.

There was more trouble in store for Pakistan as Umar Akmal (2) was brilliantly caught and bowled by a diving Ashwin to his right to reduce the score to 91 for 5. India was heading towards an easy victory but Shoaib Malik arrived in the middle to play some sweet shots and Kamran Akmal made most of the lousy full tosses from the Indian bowlers. By the end, Pakistan brought the equation down nicely with just six runs to win from the final over and an ordinary full toss from Irfan Pathan went sailing over extra covers to end the game.

Kamran Akmal remained unbeaten with a swashbuckling 92 from 50 balls with 5 fours and 6 sixes. The Wicket Keeper batsman struggled though because of the energy sapping humid conditions in Colombo. Shoaib Malik showed his utility in the team with an effortless cameo of 37* (from 18 balls with 2 fours and 2 sixes). For India, R Ashwin’s great spell of 4-0-23-4 went in vain as his bowling colleagues failed to bowl well.

Kohli, Rohit magic takes India to 185/3: India riding on brilliant knocks from Virat Kohli and Rohit Sharma finished with an imposing total of 185 for 3 in 20 overs. The Pakistani bowling attack looked ordinary except for Saeed Ajmal and Umar Gul.

The Indians got off to a positive start of 41 in 4.4 overs before Gautam Gambhir (10) dragged a pull onto the stumps off Umar Gul. Virender Sehwag scored 26 (from 14 balls with 4 fours and a six) before he got out cutting Saeed Ajmal into the hands of backward point in the 6th over.

Like always Saeed Ajmal held his own amidst all the hitting and although he was taken for a six by Kohli, the former managed to come up with respectable figures of 4-0-22-2. Umar Gul bowled well taking 1 for 31 in 4 overs.

Toss: India has won the toss and elected to bat first in the Warm-up match against arch rivals Pakistan at the R Premadasa Stadium in Colombo. The pitch is not going to be the traditional slow turned but will instead produce some nice pace and bounce off the deck.