Australian captain Steve Smith stirred a controversy by looking towards the pavilion for DRS help after being given lbw on day four of what turned out to be the last day of the Bengaluru Test. Here’s

Australian captain Steve Smith stirred a controversy by looking towards the pavilion for DRS help after being given lbw on day four of what turned out to be the last day of the Bengaluru Test. Here’s a look at who is saying what in the aftermath of the hullabaloo.

"BCCI has requested the ICC to take cognizance of the fact that the Australian skipper Mr. Steve Smith in his press conference admitted to a 'brain fade' at that moment. BCCI sincerely hopes that the rest of the matches are played in the true spirit of cricket," the BCCI said in a statement.

"I find the allegations questioning the integrity of Steve Smith, the Australian Team and the dressing room, outrageous. Steve is an outstanding cricketer and person, and role model to many aspiring cricketers and we have every faith that there was no ill-intent in his actions. We reject any commentary that suggests our integrity was brought into disrepute or that systemic unfair tactics are used, and stand by Steve and the Australian Cricketers who are proudly representing our country.” 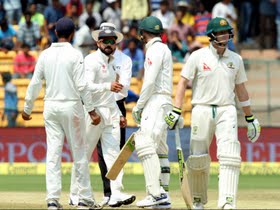 "I referred smudga (Smith) to look at the box... my fault and was unaware of the rule. Shouldn't take anything away from what was an amazing game!,"

"Never, ever, ever. Very surprised to hear that, but it's their opinion. He (Kohli) has his opinion and we have ours, but at the end of the day we play the game the right way. We've changed the way we want to play, we've obviously changed the side and we're a younger side so I'm pretty pleased with the way we do things now. We've never done any of that, so we'll just get on with the next game.”

"It was a fantastic Test match. It's a shame we are focussing on one incident. I would go with what Steve has said. I would take him on face value. The best part was umpires stepped in and stopped at then and there. Looking back Smith will be embarrassed and must have learnt a lesson.”