Indian skipper Virat Kohli finished the year as the number one ranked Test batsman as per the newly released ICC rankings. Kohli finished 2019 on 928 points, 17 points clear of close competitor Steve Smith. Kohli registered his Test-best of 254 not out against South Africa.

India's number three batsman Cheteshwar Pujara moved down to number five after not being able to capitalize on the great run Down Under, with 791 points. New Zealand captain Kane Williamson remained on the third position with 822 points despite a poor Boxing Day Test against Australia.

Australia's Marnus Labuschagne jumped up to number four spot following a sensational 2019. Labuschagne ended up as the year's top run-getter with 1,085 runs in 11 Tests, having come in as a concussion specialist for Steve Smith at Lord's during the Ashes.

Fellow Aussie David Warner is at the seventh with 759 points. He registered a triple hundred at Adelaide against Pakistan. After another memorable year, Babar Azam ended 2019 at the sixth spot.

India's vice-captain Ajinkya Rahane, who returned to form with two hundred in the year, ended on joint seventh position with 759 points. South Africa's wicket-keeper batsman, who made 95 in the win over England in the first Test, has moved into the top 10. 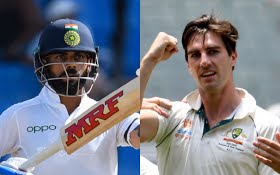 In the bowling department, Australian pace bowler Pat Cummins ended the year on top after a sensational 2019. He has 902 points to his name. New Zealand's left-arm seamer Neil Wagner is second on the list with 859 points while South African pacer Kagiso Rabada (832) finished third.

Among Indians, Jasprit Bumrah is stuck at number six with 794 points as he has been out with injury for the second half of the year. Spinner Ravichandran Ashwin (772) and pace bowler Mohammed Shami (771) are ninth and tenth in the list respectively.