Gone are the days when Bangladesh were considered pushovers. When New Zealand take on Mushfiqur Rahim’s side at Pallekele, the former would actually start as underdogs, considering Bangladesh have done well against them in the recent past.

Gone are the days when Bangladesh were considered pushovers. When New Zealand take on Mushfiqur Rahim’s side at Pallekele, the former would actually start as underdogs, considering Bangladesh have done well against them in the recent past. The 4-0 drubbing in 2010 ODI series in Bangladesh would be still fresh in New Zealand’s mind. And since this tournament is again being played in the sub-continent, Bangladesh would be hopeful of upsetting the Kiwis yet again. The opening game with be equally crucial for both sides, considering their group also includes Pakistan, winning against whom will be one hell of a tough task. 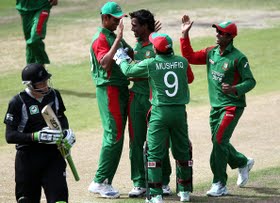 New Zealand haven’t had a great run in any format of the game in recent times. They were beaten comprehensively by West Indies and South Africa in all forms of the game, and more recently by India in Tests. However, if they want to look for positives, they won the last T20 played in Chennai against India before flying in to Sri Lanka. The match saw Brendon McCullum, one of the most destructive T20 players, at his best. That is definitely something which would have pleased New Zealand going into the series.

Keeping aside that rare triumph, Kiwis’ troubles outnumber their plusses. They have consistently failed to fire as a team in spite of having talented performers like Martin Guptill and Kane Williamson. Also, going into the match, there are a number of fitness woes for the New Zealand side. Daniel Vettori, Tim Southee and Rob Nicol suffered from gastro problems while Kyle Mills got a bout of laryngitis following his collision with Brendon McCullum during the T20 in India. And while all of them are expected to be in the playing eleven for Friday’s game, whether they will be hundred per cent fit remains to be seen.

For Bangladesh, this tournament is a great opportunity to prove that they have taken a few significant steps forward. Their performance in the Asia Cup at home was sensational, and they have played enough T20 in recent times to understand how the format works. For a change, Bangladesh also have the experienced players who have deliver in crunch situations. In Tamim Iqbal, they have an attacking opener, who can get the side off to brisk starts. The promotion of Mohammad Ashraful as opener in T20s has worked well so far and the experiment is likely to continue. And how can we forget to mention Shakib Al Hasan while discussing the prospects of Bangladesh?

In spite of their recent reverses, Ross Taylor and his men would still believe they have the arsenal to put it across Bangladesh. They would be hugely disappointed if they fail to do so. As for Bangladesh, hopes are rising on them with each improved performance. They need to be careful not to buckle under pressure. A close game seems in the offing. One can only wish that the weather, which is predicted to be gloomy at Pallekele, doesn’t play spoilsport.