IPL 2016: Pune were too lethargic with the bat against Mumbai

Rising Pune Supergiants should be extremely disappointed with their batting effort against Mumbai Indians on Sunday. Although the chasing side has had a massive advantage in matches played this season

Rising Pune Supergiants should be extremely disappointed with their batting effort against Mumbai Indians on Sunday. Although the chasing side has had a massive advantage in matches played this season, Pune did not help their cause by failing to put up a challenging total on the board batting first. They got off to a terrific start in the first half, but could not capitalise on the advantage, and faltered in the second half, which cost them in a big way. As for Mumbai, they were excellent with the ball towards the end of the Pune innings, and the batsmen carried on the good work.

When Steven Smith was dismissed in the 10th over, Pune were cruising at 92 from 2, but from that point they struggled to build partnerships, and score quickly, and it is in this phase that they lost the plot. PSP Handscomb and skipper MS Dhoni completely failed to get any sort of momentum going as Mumbai hit back hard. The boundaries weren't coming, and the singles and twos weren't taking the team anywhere. The effort of Dhoni was particularly worrying as he occupied the crease for a decent amount of time, and yet failed to get going, unable to find the desired rhythm in his game.

The lack of runs Pune got towards the end undid the good work by the earlier batsmen after Ajinkya Rahane fell early. Smith, who got a stupendous hundred in the last game, continued his brilliant knock with another smashing innings. This time, he found support from Saurabh Tiwary who, when himself not hitting the big strokes, did well to rotate the strike and give Smith the opportunity to find the boundaries. However, once Smith was dismissed, his innings too lost momentum. And, in the end, his half-century wasn't enough to take Pune to a challenging score.

Mumbai Indians' bowlers deserve a lot of credit for the manner in which they held back Pune after the kind of start the latter got. There were plenty of impressive bowling efforts in the innings. Jasprit Bumrah once again was excellent with his accuracy, finishing with 3 for 29. There were very good supporting acts from Mitchell McClenaghan and Harbhajan Singh, who both kept things extremely tight. And, while Tim Southee wasn't among the wickets, he also played a part in bringing down Pune's total to a gettable margin. 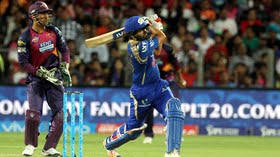 Once the bowlers had restricted Pune, the match was Mumbai's to lose. But, Rohit Sharma ensured nothing of that sort happened. He cruised his way to yet another big knock, proving that he is a master of chases, and easing Mumbai towards another impressive win. Parthiv Patel, Ambati Rayudu and Jos Buttler all chipped in with pressure-free 20s, as Pune's bowlers failed to make any kind of impact on the Mumbai batsmen. With the tournament approaching the mid-stage, it was a crucial win for Mumbai, but they still need to work on their poor fielding and catching, as it could hurt them in big games.