Champions Trophy: Virat Kohli would be interested to read what Junaid Khan has to say

India are all set to face Pakistan in the Champions Trophy on Sunday, June 4. As always, the off-field banter has begun days ahead of the contest.

India are all set to face Pakistan in the Champions Trophy on Sunday, June 4. As always, the off-field banter has begun days ahead of the contest.

Pakistan pacer Junaid Khan has said that he has the wood over Indian skipper Virat Kohli. Speaking to The Express Tribune, he said, “I have dismissed him in three out of the four matches we have faced each other. He is a brilliant batsman but he has failed against me.” 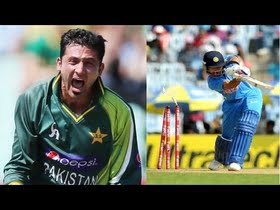 Before him, new Pakistan skipper Sarfaraz Khan had reminded India that they have a better record in the Champions Trophy, as opposed to other tournament. He added that the team will look to maintain that against them.

“We have nothing to lose, we just want to play our natural game. We have just played a very good series in the West Indies, where the players performed very well. We are very hopeful of playing well in this tournament and we want to win it. It is a very exciting time for us, there have been a lot of practice sessions at Edgbaston and we are ready to play,” he was quoted as saying.

Ahmed stressed that the team has shown significant improvements in recent times. “Against the West Indies, we had a big fielding improvement, there were one or two dropped catches but it was an improvement so we are happy with that.”

“We don’t see us as having a surprise element, we want to come here and play free cricket, starting against India. We are taking matches one by one and the Pakistan team is hopeful of building some confidence starting in the warm-up matches,” he added.