AB de Villiers, South African legend, is highly impressed with the India’s fast bowlers have performed in the series.

AB de Villiers, South African legend, is highly impressed with the India’s fast bowlers have performed in the series.

“India have really impressed me and surprised us in terms of the bowling department. They have showed lot more skill and definitely there is lot more pace than we expected. So we know we are going to have to be watchful in that last Test as they will come out fighting and wanting to finish well in the Test series and wanting to take that confidence into the ODIs,” de Villiers was quoted as saying in an Indian Express report. 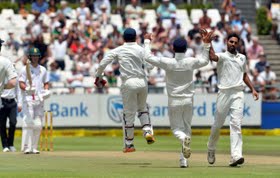 Meanwhile, de Villiers is confident of a South African clean sweep. “I can’t remember what happened, what happened in 2015, oh we won the ODI series, yeah. Obviously we would love to beat them 3-0. But you are never guaranteed of a result. We know we are going to have to dig deep again and make sure that like in the last two Tests, we adapt to the conditions and put in our best type of cricket in the conditions,” he said.

On his own form, de Villiers feels the break helped him “It feels like my debut back in 2004 when I started as an opening batsman then a keeper at no.7 and back to opening, and up and down. Its funny with my comeback now similar to back in the day. But it has been very enjoyable. I feel very fresh, and I have said it on numerous occasions in the last few months that I just feel like just getting out there and playing, and that’s what a good break does to you.”