India in Finals after thrashing Lanka in rain-curtailed contest

India bounced back in style at Port of Spain winning both its matches here with bonus points to top the table in the Tri Series. The Men in Blue thrashed Sri Lanka by 81 runs in what was a rain-curtailed affair at the Queen’s Park Oval. Sri Lanka given a revised target of 178 in 26 overs crashed out to a sorry total of 96 in 24.4 overs.

India bounced back in style at Port of Spain winning both its matches here with bonus points to top the table in the Tri Series. The Men in Blue thrashed Sri Lanka by 81 runs in what was a rain-curtailed affair at the Queen’s Park Oval. Sri Lanka given a revised target of 178 in 26 overs crashed out to a sorry total of 96 in 24.4 overs.

Bhuvneshwar Kumar wrecked apart the Sri Lankan ship taking four early wickets on the trot with the new ball. The other bowlers joined the party to demolish the Lankans. The Final will be played on Thursday between these two teams with Sri Lanka just managing to edge out hosts West Indies with a better net run rate despite today’s heavy loss against India.

Asked to bat first after losing the toss, India through a hard working knock from Rohit Sharma of 48* from 83 balls got to 119 for 3 in 29 overs before thunderstorms ended their innings in an abrupt manner.

Shikhar Dhawan failed once again in this Series, this time smacking Mathews to covers with India at 27 for 1 in 6.2 overs. India’s ship was steadied after that by the 2nd wicket stand between Rohit Sharma and Skipper Virat Kohli. The pair added 59 before Kohli (31 from 52 balls with 4 fours) was lbw to an arm ball from Herath in the 21st over. Herath struck again in the 27th over with a beautiful drifter that angled in and went onto peg back the off stump of Dinesh Karthik (12).

After play resumed following a long rain break, India was lucky as the Duckworth Lewis Method made the Sri Lankans’ task extremely tough with a target of 178 in 26 overs despite the former barely scoring at a run rate of over 4.00! 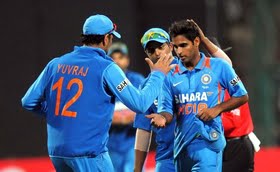 Sri Lanka were on the backfoot in no time with Bhuvneshwar Kumar removing Upul Tharanga and Kumar Sangakkara in consecutive deliveries in the 3rd over. Tharanga was smartly caught by Raina at gully edging a backfoot drive while Sangakkara was out for a first ball duck when he was wrongly given out lbw. Bhuvneshwar struck two more blows – with Mahela Jayawardene upper cutting him to thirdman and Lahiru Thirimanne out for a duck smacking him to covers to leave SL in tatters at 31 for 4 in 8.3 overs.

India sustained the pressure on the Lankans who kept on losing wickets at regular intervals with the spinners and pacers getting plenty from the up and down track. SL Skipper Angelo Mathews got caught behind edging a square turned from Jadeja while Chandimal got stumped leaving his crease to the same bowler and getting done in by the turn and bounce.

Sri Lanka from 63 for 6 in 16 overs was demolished in the next 9 overs. Bhuvneshwar Kumar collected the Man of the Match for his dream figures of 6-1-8-4. Ishant Sharma and Ravindra Jadeja took two wickets each while Umesh Yadav and R Ashwin took a wicket each.

Toss and Teams: Sri Lanka have won the toss and asked India to bat first in the final league match of the Tri-Series at Port of Spain. The Lankans who are almost into the finals have made two changes with Rangana Herath and Dilhara Lokuhettige coming in for Sachithra Senanayake and the injured Kulasekara.

India have gone in with an unchanged XI that beat West Indies. The Kohli led team needs to defeat Sri Lanka by a comprehensive margin to make it to the Finals.