MS Dhoni is the Man of the Match for his match-winning unbeaten 67 off 37 balls. 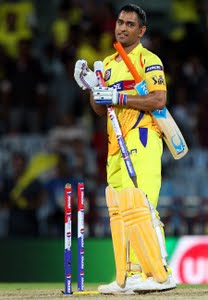 MS Dhoni: 'We started off well with the ball but in the death overs, we conceded too many runs. The bowlers did not perform well. Hussey started off but we lost wickets at regular intervals. They had two leg-spinners who were bowling very well. As the match progressed, the pitch became slower. One of the established batsman had to stay there till the end. It is difficult to judge how many is too many. We cannot have a fixed game-plan like a Duckworth/Lewis. I was more than certain that I edged it and I told the umpire to. If I am 100% certain that I edged it, I tell the umpire and the opposition. The performances have been good but we have to improve our death bowling. Not one bowler has bowled yorkers and it will be a critical factor as the tournament progresses. We have been consistent in the fielding department.'

Cameron White: 'It was a good target in the end. We batted exceptionally well in the last five overs after getting off poorly at the start. The loss is disappointing as we were in a good position. We were poor in some areas but we have a young side that is improving. We have to learn from our mistakes and perform well in the remaining games.'

Hyderabad had their chance in this game. They did well to get to 159. They did well to restrict the opposition to 132 in 18 overs and then Dhoni took over. A four and a six off Steyn and then a strange decision to bowl Reddy last over that costs them the game. Of course, Dhoni's the man, as he always is for the Super Kings. 67 from 37 after he started off so slowly. Hats off.

Chennai coach Stephen Fleming thinks his side did not deserve to win this.

some good news to Sunrisers Hyderabad on the batting front. One came yesterday - Shikhar Dhawan took part in training on Tuesday evening and could feature in Chennai.

Expectations will be high when Shikhar Dhawan walks out to bat on Thursday for Sunrisers Hyderabad against CSK here on Thursday. The exciting Delhi left-hander's return from a hand injury is a huge boost for Hyderabad who have been struggling with their batting.

Dhawan's clearance from the National Cricket Academy to play in the league came on Wednesday and an excited Kris Srikkanth, mentor of Sunrisers, said, "The best news is that Shikhar is back and will be playing his first IPL match.

Super Kings have scored less than 130 just once this season. Sunrisers, on the other hand, have crossed 130 two times in seven attempts.

Only four Sunrisers batsmen have a strike-rate of more than 100 this season - Mishra, Perera, Steyn and Ashish Reddy.