Pondering upon India best combination for the Super Eights

After a below par performance against Afghanistan, India progressed to the Super Eights smoothly, with a dominant win against England.

After a below par performance against Afghanistan, India progressed to the Super Eights smoothly, with a dominant win against England. The match brought about a lot of positives for India, not least of all Harbhajan Singh’s return to form in spectacular fashion. The same game against the Englishmen also saw the struggling Gautam Gambhir and Rohit Sharma get among the runs.

The result of the England game would have pleased M S Dhoni no end, but it also brought along a headache of a different kind. If before the game they were unsure of their combination, after the match too they were left wondering which their best XI was. After all, Virender Sehwag, Zaheer Khan and even R. Ashwin were rested for the game, as India went in with two spinners. We try to examine the two scenarios in front of Team India at the moment. 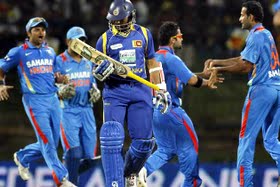 This would be a really tough contemplation, and a highly risky one at that, knowing very well what the Indian opener is capable of. However, following Harbhajan’s performance against England it would be very difficult to drop him. The only way he can get in is one of the batsmen is dropped. Before the England clash the axe would have been hanging heavily on Rohit Sharma. But, the Mumbai lad came up with a wonderfully paced half-century to book a place for himself, at least for the next few games.

On current form, the only other batsman Dhoni can consider dropping is Suresh Raina. Axing the left-hander, however, would mean weakening the fielding, as Raina is the best fielder in the side without doubt. Also, he’s got the potential to turn around a game with the bat in T20s, so dropping him doesn’t sound like a sane option. It all again comes down to Sehwag then. Age and fitness also aren’t on his side. He’s missed a number of games due to niggles in recent times. And with Virat Kohli available to open, the decision to drop Sehwag could become easier.

If India stick to their current policy of playing seven batsmen and bring back Virender Sehwag, it would mean one of India’s key bowlers would have to sit out. With Harbhajan Singh making a strong case for his inclusion, and R. Ashwin being India’s number one spinner in the T20 format, India would have to keep either Zaheer or Laxmi Balaji out of the playing XI. On paper, dropping the latter seems a simple choice. But, the Tamil Nadu seamer is a cunning T20 bowler. It is exactly why he has been recalled to the team. Zaheer, on the other hand, has struggled for rhythm. But the question is… will Indiarisk keeping the best bowler in the team out of the XI based on his current form?