True, one shouldn’t read too much into a warm-up tie as it is nothing more than an opportunity for the teams to acclimatise themselves to the conditions. At the same time, it is also a fact that sides do get a chance to figure out their strengths and weaknesses in the given atmosphere.

True, one shouldn’t read too much into a warm-up tie as it is nothing more than an opportunity for the teams to acclimatise themselves to the conditions. At the same time, it is also a fact that sides do get a chance to figure out their strengths and weaknesses in the given atmosphere. And, if these two aspects are anything to go by, the conclusion post the India-Sri Lanka warm-up tie is that the batsmen will have to win games for India, as their bowling looked totally in disarray against the Lankans.

To put the practice match into perspective, it was basically one combative partnership that won India the game against Sri Lanka at Edgbaston. When Dinesh Karthik joined Virat Kohli at the crease, the Indian innings was heading nowhere chasing a massive score. This is where India’s depth in batting came to the fore. Over the last two to three years, Lankan bowlers have developed a mental block against Kohli, just like the one the Indian bowlers of the 90’s had against Sanath Jayasuriya. This was evident once again as the bowlers, who had till then been on top, allowed Kohli to settle in nicely, and rebuild the innings. 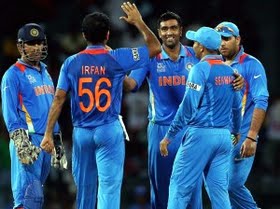 The beauty of the partnership between Kohli and Karthik was their contrasting styles of play. While Kohli decided to take it easy early on, Karthik went on the offensive from the very beginning, taking the Lankan bowlers by surprise. Significantly, the duo went on to build a mammoth partnership, under the pressure of which the Lankan bowlers eventually wilted. As his innings progressed, Kohli also began to open up, and when he attacked, there was no stopping him. Towards the end, both the Ks had the Lankan bowlers at their own mercy, and victory was a mere formality.

Even though India won the game at Edgbaston, there are still a number of issues they need to work on. The lack of penetration in their bowling attack is definitely a big cause of worry. In the game against Lanka, none of the bowlers looked anywhere near penetrative. In recent times, only Bhuvneshwar Kumar has demonstrated some sort of vitality, but even he looked off-boil on Saturday. Among the rest, Ishant Sharma and Irfan Pathan have continued to be pedestrian while R. Ashwin hasn’t gone places after his initial success. The batting collapse early on in the match against Lanka also doesn’t augur well for the Indians.

As for Lanka, they would be disappointed that their practice game against Pakistan got washed out. At the same time, they demonstrated highly impressive batting abilities against India. While their openers Kushal Perera and Tillakaratne Dilshan came up with well-compiled half-centuries, the others to follow also got a chance at a decent hit out in the middle, which should help them in the actual matches. Like India, their bowling was also poor, but they would take heart from the fact that Lasith Malinga wasn’t part of their attack.

All in all, both teams picked up some important lessons from the game, which serves the whole point of a practice match.