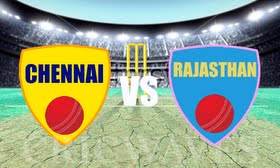 Injuries to key players have no doubt affected the Super Kings, but given the champion team that they are, they should manage to work around their shortcomings. The match provides Murali Vijay with another opportunity to showcase his T20 skills and remind people of the fact that he is no test match specialist. Since his fantastic spell in the tournament opener, Deepak Chahar has bowled four overs in the next two matches and has conceded 55 runs without picking up any more wickets.

Chennai biggest problem still lies with Jadeja. He has been sparsely used in the bowling scheme of things and him batting above Bravo has raised more than a few eyebrows. Even though Dhoni has defended Jadeja’s finishing abilities, he is yet to do anything substantial in the tournament. .

Rajasthan have been a mixed bag in this tournament so far. Even though they have won two of their matches, one of which was a rain curtailed one, they have hardly looked threatening for any of the sides. Their persistence with D’Arcy Short at the top, despite his failure to score runs has affected their powerplay batting while the lack of big scores from Stokes and Buttler has led to them ending up with below par totals.

The match against Kolkata saw an end to their nine-match winning streak at home and it appeared to viewers and cricket experts that they hardly had any intensity to try and stop that from happening. Ajinkya Rahane will also need to look at some of the decisions he made in the previous game, which included, changing the field every ball to disrupt the bowler’s momentum. Jaydev Unadkat, has barely lived up to his price tag, having bagged only two wickets from two games while the experienced Ben Laughlin has also failed to live up to his expectations.

Both teams have a 50% record at Pune with a 1-1 win-loss record for Chennai and 2-2 for Rajasthan.

Chennai has been the best in the death overs this season, scoring at 13.54 which is the highest among all the teams.

Rajasthan have taken the fewest wickets in the tournament - 14 - and have the worst bowling average among all sides - 39.14. Chennai is the only other team to average 30-plus with the ball - 33.18.

D’Arcy Short, who was the player of the 2017-18 Big Bash League, scored only 18 runs of 28 balls against spin, in the Rajasthan previous game against Kolkata.

The match against Punjab was the 15th occasion of Dhoni remaining not out at the end of an unsuccessful run chase in the IPL.