KKR Vs SRH: Sunrisers gave away too many runs with the ball

It is a well-known fact by now that batting is not Sunrisers Hyderabad’s forte. As such, when Kolkata Knight Riders decided to bat first in their clash against Sunrisers on Sunday at the Eden Gardens, it was imperative for the visitors to restrict KKR’s innings to a chaseable total.

It is a well-known fact by now that batting is not Sunrisers Hyderabad’s forte. As such, when Kolkata Knight Riders decided to bat first in their clash against Sunrisers on Sunday at the Eden Gardens, it was imperative for the visitors to restrict KKR’s innings to a chaseable total. But, their bowling, which has so far been their stronger suit in the tournament so far, couldn’t stand up to the exceptionally gifted KKR batsmen, as a result of which the hosts manage to notch up a highly competitive total. Sunrisers just didn’t have the talent to chase down the same.

KKR put up a near-perfect performance with the bat, and never allowed the Sunrisers bowlers even a sniff. Opener Manvinder Bisla got the side off to a brisk start, and the three other experienced batsmen in the side ensured that KKR never backed down from the early tempo that was created. Skipper Gautam Gambhir once again led from the front. When Bisla was blazing along, Gambhir was happy to play second fiddle. However, once Bisla’s cameo came to an end, the left-hander took charge of the innings, and played some attacking strokes to put KKR completely on top. 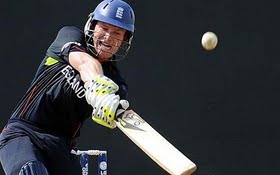 The knocks played by Jacques Kallis and Eoin Morgan were also brilliant. Both complemented each other perfectly well during the partnership, with Morgan being the aggressor and Kallis holding one end up till the very end. Morgan once again demonstrated why he is such a dangerous player in this format of the game. Some of the strokes he hit were massive ones. Had Morgan not come up with five fours and three sixes during his knock, KKR wouldn’t have progressed as far as they eventually did. As for Kallis, his assurance at one end, made it easier for Morgan to go all out after the bowling.

Chasing a huge total, Sunrisers needed to get off to a very good start. They began briskly, but could not carry on the good work right throughout. Also while Parthiv Patel and Cameron White, who was promoted to open the innings, came up with a couple of big shots, they could never maintain the desired strike rate required. While Patel scored at under 100 runs an innings, White managed to do so at just over 100, neither of which was good enough under the circumstances. And once they departed, things became extremely difficult for the Sunrisers.

After performing well with the bat, Kallis also came up with an exceedingly good spell with the ball. His economical three-wicket spell, which included the vital scalps of Patel, White and Thisara Perera, broke the back of the batting side. Apart from Patel and White, Perera was the only other batsman who came up with a substantial score, a factor that severely affected any little chances Sunrisers had of winning. Skipper Kumar Sangakkara’s dismissal cheaply was another element that did not help their cause. At the end of the day, they had too many to chase.

Turning point of the game: Morgan’s 21-ball 47 was the difference between a competitive and match-winning total.