Former India captain Mahendra Singh Dhoni turned 39 on Tuesday, July 7. Dhoni is regarded as one of the greatest Indian captains. He is the only skipper in history to have won all three ICC trophies -- 2007 T20 World Cup, 2011 World Cup and 2013 Champions Trophy.

Of late, Dhoni has been in the news for not having played any cricket for India since the team's exit at the 2019 World Cup semi-finals. Talks of his impending retirement have been doing the rounds ever since. Despite him being away from the game, Dhoni's fan following has stayed in tact. 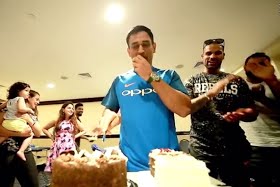 As Dhoni turned 39, many from the Indian cricket fraternity extended their wishes to him, including current captain and coach Virat Kohli and Ravi Shastri.

“Inspiration to his Army and Decimation to the Army beyond the Enemy lines. Couldn’t find a better phrase to define @msdhoni, happy birthday Mahi Bhai, have a great day and continue to inspire all of us,” read Ravichandran Ashwin's tweeted.

“Happy birthday to my Bittu from your Chittu. My friend who has taught me to be a better human being and stood by me in bad times @msdhoni,” allrounder Hardik Pandya wrote in a cheeky tweet.

“Happy birthday Mahi Bhai. I hope you have a wonderful and fantastic day. Thank you for being such an amazing human being. God bless you,” left-arm spinner Kuldeep Yadav, who has always praised Dhoni’s contribution to his rise, tweeted.

"Many more happy returns of the day to a man whose composure and patience continues to be an inspiration. #HappyBirthdayDhoni," former teammate VVS Laxman said.

"Once in a generation, a player comes and a nation connects with him, think of him as a member of their family, kuch bahut apna sa lagta hai. Happy Birthday to a man who is the world ( Dhoni-ya ) for his many admirers. #HappyBirthdayDhoni," retired opener Virender Sehwag tweeted.

Suresh Raina also took to Instagram and said, "Here’s wishing a very Happy Birthday to one of my favorite human, brother & a leader I could ever ask for! The man who has always played with his mind and heart. His Captaincy has not just been successful because of his decisions but also because of his faith in every member of his team! So cheers to our Special No. 7, who made winning as a habit. Thank you for all the inspiration @mahi7781 Bhai."