India coasted to a five-wicket win in the first T20I at the Subrata Roy Sahara Stadium in Pune. Yuvraj Singh who made a significant contribution taking 3 for 19 with the ball shone with the bat as well to score a match turning 38 from 21 balls to set up an easy victory for the hosts.

India coasted to a five-wicket win in the first T20I at the Subrata Roy Sahara Stadium in Pune. Yuvraj Singh who made a significant contribution taking 3 for 19 with the ball shone with the bat as well to score a match turning 38 from 21 balls to set up an easy victory for the hosts. India got to the target of 158 with 13 balls to spare.

It was a terrific start given by Ajinkya Rahane who struck two lovely sixes straight down the ground to provide the initial momentum with his 13-ball 19. Yuvraj Singh made an impact by striking two fours and 3 sixes while taking out left-arm spinner Danny Briggs out of the attack. India had little trouble in getting to the target as partnerships kept on coming and the momentum was sustained. 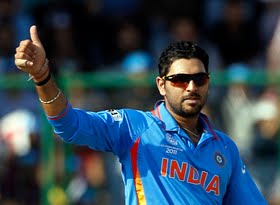 Yuvraj Singh got the Man of the Match for his all-round performance.

England start well and end well: England posted a healthy total of 157 for 6 after being asked to bat first by India on a good batting surface. Opener Alex Hales provided the impetus for the Englishmen with a knock of 56 from 35 balls with 7 fours and 2 sixes. Hales took England to a strong position of 89 for 2 in the 11th over with Wright, who scored 34 from 21 balls.

In the middle overs, England were pegged back with Yuvraj Singh took 3 for 19 in 4 overs by slowing down his pace cleverly. Ashok Dinda bowled an effective spell in the final stages for his 2 for 18 in 3 overs while R Ashwin who started off well with a maiden spoilt it with 4-1-33-1. Jos Buttler with a crucial cameo of 33* from 21 balls with 3 sixes came heavy on debutant Parvinder Awana (2-0-29-0) to provide a perfect finish for England.

Toss and Teams: India have won the toss and asked England to bat first in the 1st T20I at the Subrata Roy Sahara Stadium in Pune. Rohit Sharma, Rayudu, Bhuvneshwar Kumar and Abhimanyu Mithun are on the bench for India. For England, Bairstow, Root and James Harris sit out. The pitch is expected to have good true bounce and pace for the ball to come onto the bat nicely. The square boundaries are pretty small at this venue.

Speedster Parvinder Awana will be making his International Debut tonight. He is the second pacer after Ashok Dinda in the playing XI. England are playing two specialist spinners in James Tredwell and Danny Briggs.