The schedule for the 2015 World Cup was recently released. And since, it will be the first time that the cricketing extravaganza will be returning to Australia and New Zealand since 1992, the latter event has come back into focus.

The schedule for the 2015 World Cup was recently released. And since, it will be the first time that the cricketing extravaganza will be returning to Australia and New Zealand since 1992, the latter event has come back into focus. A lot of legendary players have been recalling their association with the mega-event, which is till date considered among the best World Cup to be ever organised. Inzamam-Ul-Haq has stated that the 1992 World Cup victory heralded a golden era in Pakistan cricket while Sachin Tendulkar and Allan Donald have fond memories of the tournament. Even till date, Ian Botham regrets losing the final of the 1992 World Cup.

The 1992 World Cup does deserve all the plaudits it is getting for it had a major role in revolutionising one-day cricket. Colouredclothing and white balls came into the World Cup for the very first time, which gave the format a glossy feel and made viewing the sport exciting than ever for the viewers. The uniforms of the team were also very sober and easy on the eyes unlike today’s bright and very much annoying colours, which at times, can be a real eyesore. There is so much today’s generation involved with the game can learn from the 1992 experience. 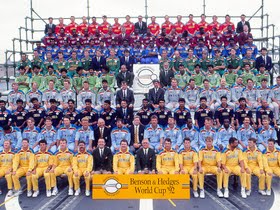 The quality of cricket itself improved drastically during the wonderful event. This was chiefly because a lot of great players and potential young talents were part of the event. Legends like Kapil Dev, Imran Khan, Graham Gooch, Ian Botham, Kepler Wessels, Javed Miandad, Malcolm Marshall, Allan Border and Craig McDermott were all part of the competition. Further, a number of rookies announced themselves on the big stage. Sachin Tendulkar. Brian Lara, Inzamam-Ul-Haq, Jonty Rhodes and Allan Donald among many others were playing in their first World Cup. Each left their indelible mark on the tournament and went on to become greats of the game in the decade that followed.

Innovation was also at its very best during the 1992 edition. New Zealand, in particular, were the trendsetters in this aspect. While Kiwi skipper Martin Crowe was at his very best with the bat playing some incredible knocks, his leadership was extraordinary. His decision to open the bowling with the off spin of Dipak Patel as a means to counter the field restrictions took most opponents by surprise. Until then, openers hadn’t faced a spinner at the top of the innings, and they had no idea how to deal with this challenge.

The concept of pinch-hitting also originated during this World Cup. And no, it wasn’t Sanath Jayasuriya but New Zealand’s smashing left-handed opener Mark Greatbatch who exploited the field restrictions that were brought into place into the one-day game, constantly hitting over the top and getting the team off to blazing starts. Not surprisingly, New Zealand’s performance was one of the biggest success stories of the 1992 World Cup. There were loopholes as well, none bigger than the bizarre rain rule which knocked out South Africa. But, the tournament had more positives than negatives, and changed one-day cricket forever.