When Afghanistan qualified for the 2015 ICC Cricket World Cup, it was a massive moment for them, a just reward for the years of struggle their players have put in. Afghanistan have taken part in a couple of World T20s

When Afghanistan qualified for the 2015 ICC Cricket World Cup, it was a massive moment for them, a just reward for the years of struggle their players have put in. Afghanistan have taken part in a couple of World T20s, and even featured in the Asia Cup, where they were actually successful in defeating a much more experienced Bangladesh. Qualifying for the World Cup though was something else. And now, the sweet taste of victory, that too so early in the mega event, is a feeling they would find hard to describe. Yes, the opponents were Scotland, but even they are a team with better exposure to international cricket as opposed to Afghanistan.

The win wasn’t an easy one. It could not have been for two bowling outfits from either side bowled splendidly on the day. But, in the end, Afghanistan pulled away against all odds. Chasing 211, they seemed down and out at 97 for 7. But, recovered from that stage to pull off an incredible victory, giving ample of the self-confidence they have in their ability. Under the circumstances, they could have easily capitulated. They were expected to, for unlike Ireland, who also made a smashing comeback a day before, Afghanistan did not have the experience to deal with such a situation, but they did, and how. 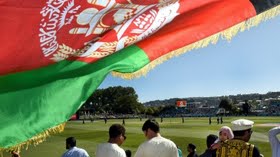 Undoubtedly, it was Samiullah Shenwari’s performance that stood. He came into bat when the team’s batting had completely collapsed. But, he did not give up, and bringing all his domestic experience into play, came up with heroic knock that would be etched in the memory of Afghan fans forever. The manner in which he held the innings together, and eventually took the side to the doorsteps of victory is commendable in every sense. Of course, he would have been disappointed to have fallen before the finish line, but luckily his fate wasn’t so cruel, and Afghanistan overcame the Scots.

Although Shenwari was undoubtedly the star of the show for Afghanistan, there were a couple of other batting efforts which also deserve mention. Opener Javed Ahmadi made a run-a-ball 51 at a time when wickets were falling all around him. The last wicket pair also came up with an exceptional show. Hamid Hassan and Shapoor Zadran joined forces with Afghanistan at 192 for 9. They kept an extremely steady head to take the side home. Hamid’s unbeaten 15 from 39, and Zadran’s 12 from 10, both were worth their weight in gold.

The bowling from both sides was fantastic, and bowlers from neither team deserved to be on the losing side. For Afghanistan, Shapoor Zadran claimed 4 for 38, and Dawlat Zadran 3 for 29. Richie Berrington was the bowling star for Scotland with 4 for 40. Josh Davey and Alasdair Evans were also excellent keeping things tight, and claiming a couple of wickets each. With better luck, Scotland could have pulled off a famous win, but Afghanistan had enough in the tank to outdo them.