Mustafizur Rahman claimed his third one-day five-for in less than 10 matches as Bangladesh clinched the series against Zimbabwe 3-0, beating Zimbabwe by 61 runs in the final ODI.

Mustafizur Rahman claimed his third one-day five-for in less than 10 matches as Bangladesh clinched the series against Zimbabwe 3-0, beating Zimbabwe by 61 runs in the final ODI. Chasing a tough target of 277 set by the hosts, Zimbabwe managed only 215 as Mustafizur's 5 for 34 sunk them. All the other Bangladesh bowlers chipped in with a wicket each as Zimbabwe never got themselves into any sort of position to chase down the target. Sean Williams top-scored for Zimbabwe with 64 while Elton Chigumbura and Malcolm Waller made 45 and 32 respectively, but it was never going to be enough.

Mustafizur troubled the Zimbabweans right from the start, going past the edges numerous times, and it seemed only a matter of time before he was rewarded for his incisive bowling. And, that proved to be the case. He got through the defense of Chamu Chibhabha early on in the chase. Regis Chakabva also fell to the left-arm seamer for 17 as the visitors got off to a poor start. Craig Ervine was looking good on 21 when he was trapped in front by Nasir Hossain. Williams and Chigumbura then featured in a fighting stand for Zimbabwe, but once that was broken, Mustafizur came back, and ran through the tail.

Having already won the series following the 58-run triumph in the second one-dayer, Bangladesh went into the third ODI against Zimbabwe at Mirpur on a high. They continued their good run with the bat, after having won the toss, and having decided to bat first. They finished on 276 for 9, thanks to good contributions all round. Right from the start, Bangladesh looked in control, and never let the advantage slip, although they would have been happier had they managed to cross the 300 mark. 276 was a total they would have taken though considering their potent bowling and the conditions. 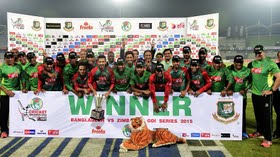 The Bangladesh openers set things in order for the hosts at the start of the innings. Both Tamim Iqbal and Imrul Kayes looked in good control as they scored in the range of five to six runs an over. It was the kind of start they needed after having decided to take first strike. The duo was rarely troubled as they went about making merry. Iqbal and Kayes had added 147 in a little under 30 overs when the partnership was finally broken. Kayes was out for 73 as he was stumped off Sikandar Raza's bowling. Kayes hit 6 fours and 4 sixes in his 95-ball stay.

Later, Iqbal also fell to exactly the same score as Kayes. He was also stumped, off Graeme Cremer's bowling. Iqbal's 98-ball knock included 7 fours and a six. By the time he was dismissed, Iqbal had put Bangladesh in a commanding position at 173 for 2. Mushfiqur Rahim made a breezy 28 before being dismissed, but when Liton Das fell having made only 17, Bangladesh seemed to be losing their position of dominance. This is where Mahmudullah chipped in with a handy half-century. His 52 from 40 took Bangladesh pass 275, as the hosts finished on an impressive note.