The unofficial practice games in the tournament are over. All teams expected to make it through to the Super Eights have done the same. The real battle begins now, with Sri Lanka taking on New Zealand in the first Super Eights clash at Pallekele.

The unofficial practice games in the tournament are over. All teams expected to make it through to the Super Eights have done the same. The real battle begins now, with Sri Lanka taking on New Zealand in the first Super Eights clash at Pallekele. The hosts go into the game with a mixed bag. They tasted a comprehensive victory against the hapless Zimbabweans before being undone by South Africa in a rain-marred seven overs per side contest. Their opponents, the Kiwis, too had a similar run. While Brendon McCullum blasted them to a cherished win over Bangladesh, the defeat against Pakistan proved that against bigger teams they are liable to flounder. 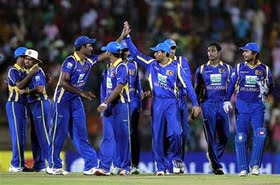 For sure, Mahela Jayawardene’s men will look to target New Zealand’s weaknesses against spin. They have a problem though as their number one spin bowler, Ajantha Mendis, has not been declared fully fit as yet. Mendis had suffered from a side strain, and is still in recovery mode. Although he wouldn’t be expected to repeat the heroics of the game against Zimbabwe, Mendis’ absence will weaken the team. If he fails to recover in time, Lankans are likely to try out the rookie Akila Dananjaya, Reports state that he possesses a variety of balls in his kitty, including the carom ball and the doosra. But, playing on the international circuit against high-quality opponents will be a tough challenge for him, without doubt.

Sri Lanka have to take one key decision in the batting department as well – whether to continue opening with Dilshan Munaweera or ask skipper Mahela Jayawardene to do the job again with Tillakaratne Dilshan. Jayawardene has the experience for bigger games, which might prompt the Lankan team management to push Munaweera down to the number three spot. No changes are expected in the rest of the batting line up.

The Kiwis’ strength is also their weakness. They depend too heaving on their dashing opener Brendon McCullum. When he fires, New Zealand rarely lose, but he alone cannot carry the burden of the entire team. The likes of Martin Guptill, Rob Nicol, and Kane Williamson must rise to the occasion. Also, New Zealand have been shifting their players up and down the order in recent times, but need to figure out how much merit there is in the move. Ross Taylor came into bat lower down in the order against Pakistan, and although he played a whirlwind innings, the game was pretty much over by the time he walked in. The aim of a team in a T20 match must be to allow the best players in the side get maximum strike.

Spin is one area where most teams believe they can trouble New Zealand. However, both against Bangladesh and Pakistan, they tackled the threat commendably well. The performances should give them confidence, but the quality of Lanka’s spinners is expected to be top class, so New Zealand cannot relax.

Given the conditions and team make up, Sri Lanka should fancy their chances. Kiwis would be hoping for some Brendon magic coupled with supporting acts from others.