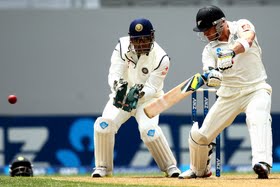 1.Three of Zaheer Khan's seven away five-fors have come in New Zealand.
2.No spinner other than Daniel Vettori has taken 50 wickets in New Zealand.
3.As was the case with South Africa's batsmen, India coach Duncan Fletcher has worked as a consultant with the New Zealand batsmen too.
4.Taylor, who reached the 4000-run mark during the series against West Indies, took 94 innings to get there, only one more than the fastest New Zealander to the mark, Martin Crowe.