Stung by a massive defeat in the Second ODI at Adelaide, the Australian Selectors have recalled the trio of Michael Clarke, David Warner and Wicket Keeper Matthew Wade in the squad for the next two matches at Brisbane and Sydney.

Stung by a massive defeat in the Second ODI at Adelaide, the Australian Selectors have recalled the trio of Michael Clarke, David Warner and Wicket Keeper Matthew Wade in the squad for the next two matches at Brisbane and Sydney. All-rounder Moises Henriques, who is capable of big hitting in the lower middle order while bowling sharp medium pace, has been given a comeback after three years. Matthew Wade gets his opportunity with Brad Haddin injuring his hamstring in the second ODI during his half century knock. 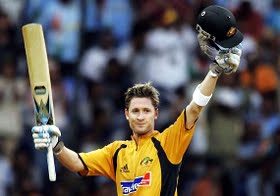 The Australian Selectors have dropped as many as five players - Aaron Finch, Usman Khawaja, Steven Smith, Ben Cutting and Kane Richardson from the squad that was picked for the first two games. The 5-match Series between Australia and Sri Lanka is nicely poised at 1-1 and the hosts will be keen in avoiding a series defeat which gives them little chance to experiment with their squad.

Cricket Australia has informed the media that fielding coach Steve Rixon will act as the Head Coach with Mickey Arthur going to miss the 3rd ODI which is on the 18th of this month at Brisbane.

According to the Cricket Australia website, National Selector John Inverarity has commented on the squad saying: “Changes to the squad that played the first two matches of the Series are the return of Michael Clarke, David Warner and Matthew Wade, after having a break. Moises Henriques also comes into the squad as a genuine all-rounder whose bowling will be suited to conditions often found at the Gabba.

“Moises is a young man who has shown promise for some years with both the bat and the ball. This will be an opportunity for him to impress as we look for a good seam bowling all-rounder.”