Rohit Sharma’s century went in vain as JP Duminy and AB De Villiers played a superb inning to guide South Africa to a comfortable seven-wicket win over India in the first T20 international of three match series at Himachal Pradesh Cricket Association in Dharamshala. Batting first, India scored 199 runs at the loss of five wickets while South Africa chased down the challenging target very easily with two balls to spare.

Duminy (68 of 34 balls, 1x4 7x6) and Farhaan Behardien (32 of 23 balls, 4x4 1x6) added 105 unbeaten runs for the fourth wicket to steer visitors to a memorable win and thus taking a 0-1 lead in the three-match series. South Africa started the chase in quick fashion and scored at more than ten runs per over for the first seven over. Both de Villiers and Amla was looking set for a big score but Amla ran himself out in the eighth over and handed India their first breakthrough. The wicket didn’t bothered de Villiers and he kept on scoring at brisk rate which kept South Africa ahead of India throughout their inning. But de Villiers departed just after scoring his half century in trying to step out against Ashwin. Skipper Faf du Plessis (4) didn't trouble the scoring too much as he went back cheaply putting the visitors in a bit of trouble in a chase of 200. The team was 95/3 in 11th over then. Then Duminy and Behardien played sensibly to build match winning stand and take visitors home. 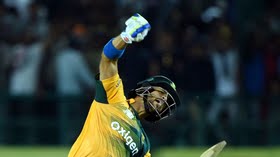 Earlier, India was sent in to bat by Faf du Plessis and they received a major setback at the start of the inning. Shikhar Dhawan was run out in try to steal a single off misfield. Rohit Sharma made full use of the batting conditions and scored his first T20 international century and became the second Indian batsmen to score century in T20 international after Suresh Raina. Kohli (43 of 27 balls, 1x4, 3x6) also joined the act, hitting a consecutive six and a four at the start of the eighth over off pacer Chris Morris. The Sharma-Kohli 138-run second wicket partnership enabled India to launch some big shots in the death overs. The 28-year-old right-hander brought up his century with a majestic six over long on off pacer Merchant de Lange in the 15th over. Virat Kohli became the first Indian batsman to score 1000 runs in T20 international. Kyle Abbott dismissed Kohli and Sharma in the same over and retarded the scoring for some extent.