India must seek to finish England series on a high

The one-day series may be in India’s bag already, but they would do well to keep the winning run going and clinch the final ODI of a satisfying series, at Dharamsala on Sunday. India have undoubtedly been much proficient in the last three matches played.

The one-day series may be in India’s bag already, but they would do well to keep the winning run going and clinch the final ODI of a satisfying series, at Dharamsala on Sunday. India have undoubtedly been much proficient in the last three matches played. Even so, a 4-1 margin would read a lot better than 3-2. The scoreline would be particularly crucial for India considering they haven’t had a good time in international cricket of late. In such a scenario, they should be hungry for success and go all out for a triumph, one last time against England.

At the same time, India must also look to give some youngsters in the team, who have been on the bench, a chance to have an outing. The hosts are in the win-win situation for now, and they should utilise the same to the hilt for such chances have been few and far in between for them in recent times. Ideally, there should be a fine balance wherein, without tinkering completely with the combination, some modifications should be made so that the fringe players get an opportunity to take the field in a low-pressure game. 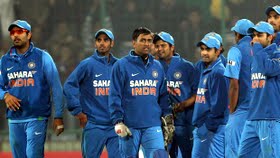 Gautam Gambhir, for one, could make way for Ajinkya Rahane. The experienced left-hander has been given innumerable opportunities to restore his form, but has failed on countless occasions. It is about time India start looking beyond him, just like they have begun searching for Virender Sehwag’s replacement. The team management made a bold move by getting Rohit Sharma to open the innings at Mohali. The Mumbai batsman hadn’t got any runs prior to the game. Rahane too hasn’t been among the runs, but with the series pocketed, it would be worth risking him at the top of the order. If the move comes off, India could have a new opening combination for the future.

Cheteshwar Pujara is another batsman, who deserves a knock out in the middle. He has been in exceptional form this Ranji season, and must be given an opportunity to demonstrate his skills at the ODl level. Considering his current run of domestic scores, the sooner the better. He could be drafted in for either Virat Kohli, who can be given a breather or Yuvraj Singh, whom Indian cricket needs to treat with care. Although he has overcome a dreaded illness, it must be ensured that the southpaw isn’t overburdened too soon as he has only just come back to international cricket.

There isn’t much scope for change in the bowling department. If at all anything, Ashok Dinda could be brought in for Ishant Sharma. Dinda has been around the international scene for a while now, but the team management is still not quite sure what to expect of him. His performance at the death has been a particular worry. Indian cricket needs to take a decision on him since the speedster is not young anymore. At the same time, he should be given a fair trial.

For both M S Dhoni and ideal cricket, a 4-1 scoreline would be ideal culmination to the series. Can India deliver?