Once India’s bowling spearhead, ageing warrior, Zaheer Khan announced his retirement from international cricket on Thursday. Although he hadn’t played a Test in well over a year, Zaheer still finished as one of India’s most successful bowlers to played the game. In 92 Tests, he claimed 311 wickets at an average of 32.93, and played 200 ODIs, picking up 282 wickets while averaging 29.43. In addition, he also featured in 17 T20s. Ever since he made his debut, the left-arm seamer put up a number of match-winning efforts. We took the tough task of short-listing five. Have a look.

(3 for 62 and 4 for 76 at Galle in August 2001): Sri Lanka is not a place where pace bowlers enjoy a lot of success. But, just a year into his international career, Zaheer proved his prowess at the Test arena. He made the ball talk, and swung it like a pro. In the first innings, he got the big scalps of Marvan Atapattu and Russell Arnold. But, it was in the second innings of the Test that he set up the match for India, claiming Sanath Jayasuriya, Kumar Sangakkara and Mahela Jayawardene. India went on to win the Test by seven wickets. 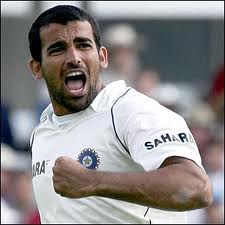 (4 for 59 and 5 for 75 at Nottingham in July 2007): This was the series which put Zaheer on a different pedestal altogether. England was where he began his second coming with a successful county stint, and he brought all his experience to the fore during this match-winning effort. He was lethal in the first innings, and his four-for kept England down to under 200 as they batted first. He then claimed five in the second, all being top English batsmen. India registered a famous victory by seven wickets, and Zaheer was man of the match.

(5 for 91 and 57 not out at Bangalore in October 2008): This game was drawn, but Zaheer starred with both bat and ball. Even as India conceded 430 in the first innings against Australia, Khan was the standout performer. Then, India had crumbled to 232 for 7, when Zaheer, along with Harbhajan Singh (54) rescued them. The pacer remained unbeaten on 57 having faced 121 balls. He was again the man of the match.

(5 for 74 and 3 for 43 at Mohali in October 2010): Almost exactly two years on, Zaheer featured in a match-defining role against the same opponent. Again, Australia crossed 400 batting first, but Zaheer held his own. In the second innings, he ripped through the tail, as Australia were bundled out for 192. In a tense chase, VVS Laxman then saw India home with that memorable 73 not out.

(5 for 42 at Margao on February 14, 2007): Zaheer’s only ODI five-four came against Sri Lanka. The visitors batted first, but Zaheer sent back Jayasuriya and Upul Tharanga for single figures. He soon added Sangakkara to the list, claiming him for a duck. Zaheer returned to claim the tail, and finish with his best figures in a game India won by five wickets.