Trinidad and Tobago leg-spinner Samuel Badree has been selected in the West Indies Squad to play a 2-match T20 Series in Florida, USA against New Zealand.

Trinidad and Tobago leg-spinner Samuel Badree has been selected in the West Indies Squad to play a 2-match T20 Series in Florida, USA against New Zealand.

Badree, who is 31 years old, made his first-class debut almost 10 years back but has played very few matches so far in domestic cricket. For the record, till date, Samuel Badree has figured in just the 12 first-class matches ever since making his debut in competitive cricket in 2001/02. The leggie was recently part of the West Indies A T20 team that played against the touring India A. 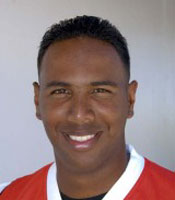 Injured Darren Bravo, Andre Russell miss out from the 13-man West Indies Squad. Chief Selector Clyde Butts according to the WICB official website has been quoted to have said: “Badree has been a consistent performer in regional tournaments over a period of time and the selectors felt it was the right time to introduce him to the team”.

The two T20Is between West Indies and New Zealand will be played at the Central Broward Regional Park Stadium Turf Ground, Lauderhill in Florida on June 30 and July 1.